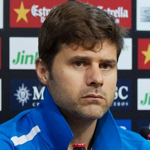 Posted by: jsharpe on October 3, 2015 in InstallerLEAGUE, Who's the boss Leave a comment

After our first full month of fixtures in the Premier League, we can start seeing which teams are doing well and which will struggle.

Arsenal, Man United and Man City look like they’ll be fighting it out for the top spot, whereas last season’s winners Chelsea have plummeted down the table, and are in a bit of trouble.

Leicester and Crystal Palace are having barnstorming starts and look set for the top of the table, instead of the bottom.

But it’s worrying if you’re a fan in the North East, with both Newcastle and Sunderland struggling desperately to put points on the board. It could be a long season for both of them.

So what are the early signs in the InstallerLEAGUE? One man to keep an eye on is Sherman Hardy-Lane and his Shermans Shots team, who bagged the Manager of the Month award for September. Congrats: