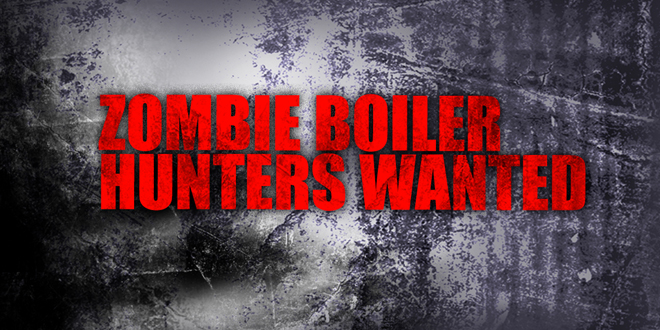 Posted by: jsharpe on October 3, 2017 in Competitions, Industry News Leave a comment

The ‘Zombie Boilers’ are back – Here’s how you can fight them:

‘Zombie Boilers’ are being targeted this October in a campaign from Wolseley Plumb Center, designed to raise awareness of inefficient boilers and their gruesome costs to homeowners.

In the run up to Halloween and beyond, Wolseley Plumb Center is urging installers to unearth boiler horrors they spot on jobs and encourage homeowners to replace them because of the threat they pose. Easy to detect, these zombies let out moans and groans from worn-out parts and pipes, and result in costly winter fuel bills.

Installers can follow the campaign on Twitter by using #zombieboiler and enter a competition to win a zombie experience by tweeting @plumbcenterUK photos of boiler horrors they spot and slay.

Wolseley category director heating and renewables Richard Harvey said: “Homeowners should fear the warming dead – these boilers hide away in our homes gorging on energy, threatening freezing winter breakdowns, and sending bills rocketing. We’re urging heating engineers to unearth these relics and let homeowners know they have a horror in their midst that isn’t doing its job of heating their house properly.” More than nine in every ten of the UK’s 25 million homes has gas central heating and a third of these – around nine million – are estimated to house an ageing, inefficient boiler. Worse still, two million of these are believed to be heated by a boiler so decrepit they have been labelled ‘zombie boilers’. They look alive, but do not function in any rational form.

Richard Harvey added: “If these were real zombies, this would be an apocalypse. We want to support heating engineers and UK homeowners to rid homes of these aged boilers that burn cash. They don’t heat properly, they give out emissions and risk breakdowns at the most inconvenient of times.”