How to get the best from commercial boilers

Home » How to get the best from commercial boilers 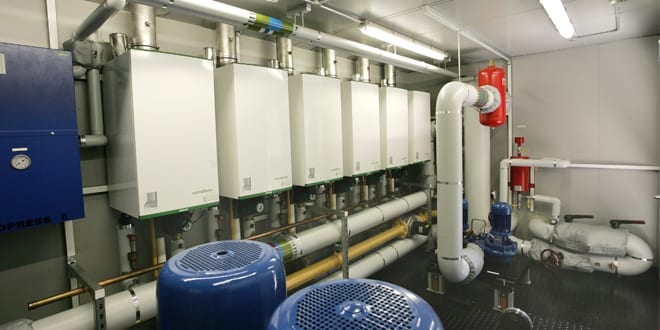 Within the commercial market today, approximately 70% of boilers from 30KW and higher are wall hung.
To what extent these modern condensing boilers actually deliver higher efficiencies compared to their old counterparts is, however, dependent on a number of factors including whether they are correctly sized and specified, as well as the manner in which they are controlled.
So what are the main principles to be respected in the creation of an efficient heating and hot water system? Although there is a definite desire on the part of specifiers to provide for future flexibility in terms of additional demand, they should resist the temptation to oversize. Aside from the increased capital outlay, one could be reducing the boiler’s capacity to modulate at low loads. It is also important to design for achieving low return temperatures in order to maximise the time when a boiler condenses. A Larger delta T or a return temperature of 560C or below is generally considered desirable.
Wall-hung boilers are often installed as a cascade of three or more units which not only means maintenance can be carried out without interruption of service, it also allows the duty to be shared.
Interestingly most condensing boilers offer slightly better efficiency when running at a percentage of their potential output; which can be taken advantage of in a cascade arrangement.  While figures vary between different boiler ranges, a model which delivers 102% net efficiency at 100% capacity might see this rise to 106% net when running at 25% capacity; this increase resulting from the lower volume of flue gas passing over the heat exchanger.
With an appropriate sequencing controller, one boiler would modulate up until the demand requires output from a second unit; at which point the duty will be shared equally between the pair. The same applies when a third boiler has to contribute. Meanwhile, the main controller also ensures ‘first up’ duty is rotated between the individual boilers in order to even out wear.
To weather compensate condensing boiler plant directly utilising outside temperature sensors, will provide higher efficiencies and further savings, since a lower flow temperature will also give a lower return temperature and therefore aid condensing possibilities. In practice, for a part load situation, the boiler controller reduces the fan speed, in turn causing a pressure drop which is utilised to modulate down the pressure operated gas valve. By incorporating weather compensation control, the premix air and gas is modulated down further. So, introducing weather compensation directly to the boiler plant is one of the key measures which can be used to improve the performance of new and existing heating systems.
Another is to replace hot water storage vessels with modern plate heat exchanger (PHE) technology. When a boiler constantly cycles to try and maintain the temperature of large amounts of stored domestic hot water, it is generally firing inefficiently; normally well below its modulation range. The way to eliminate these cycling and standing losses is to replace the calorifier with a PHE such as one of the Econoplate Packaged Plate Heat Exchangers that heats domestic water on demand at much higher levels of efficiency and combats the possibility of Legionella contamination. Essentially, the PHE set up sees higher loads being met instantaneously, resulting in the boiler mainly working within its part load or modulation capabilities. The plate heat exchanger also provides primary return temperatures as low as 350C which is ideal for condensing boilers. Further savings would be achieved by making use of a preheat vessel where the hot water is heated from a solar thermal system.
Given the Government’s environmental agenda, the proportion of smaller, wall-hung boilers is likely to remain as the larger share of the market as the uptake of renewable energy increases and, therefore, the “top up load” provided by the boiler plant dictates smaller boilers that are able to provide good turn down/modulation with condensing capability that match the required load.
For further information on Stokvis Energy Systems, please call 020 8733 3050 or visit www.stokvisboilers.com.