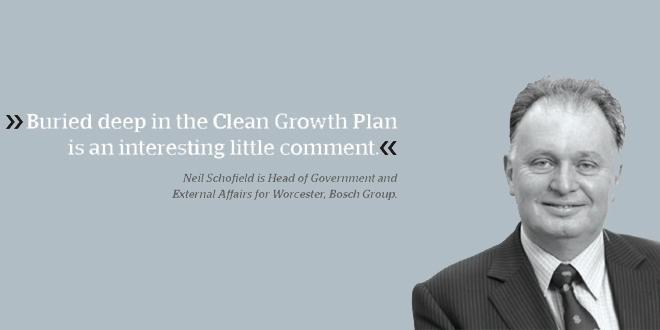 Posted by: jsharpe on January 4, 2018 in Installer Blog Leave a comment

Does the Government want to phase out oil heating?

Neil Schofield – Head of Government and External Affairs for Worcester, Bosch Group – looks at how the Government views the future of heating oil.

They talk of little else in Chipping Camden. That’s not strictly true, but it will be if the Government carries on this way.

What am I banging on about? Well, buried deep in the Clean Growth Plan, where only the sort of people who read instruction manuals will find it (Page 79, Subsection 15, Line 3, for the nerds) is an interesting little comment that might come back to haunt this Government.

“Our ambition is to phase out the installation of high carbon fossil fuel heating in new and existing off-gas grid residential buildings (which are mostly in rural areas) during the 2020s.”

In other words, oil. That’s right – a Conservative Government is proposing to phase out oil heating in the rural Shires, replacing it with, presumably, more expensive electricity.

Now, it doesn’t take a genius to work out why this was buried on page 79. When Colonel Blimp (he’s fought in every battle since the Light Brigade charged), resident of The Gallops in Moreton-in-the-Marsh, finds out that his oil Aga is going to be turned off, one suspects he will be none too pleased (“It’s the Nanny state!”).

My guess is that nobody in the Tory party has thought this through. They may not even realise it’s in the plan, seeing as they’ve got quite a lot of other stuff on their plate.

So how did it get in there? Well, our civil servants have always been notoriously anti-oil and are very adept at pushing their own agenda, slipping things into speeches and plans unnoticed. Anyone remember the tax on hot pasties? My guess is this one will be quietly shelved, sometime around the next election, once the Daily Mail has christened it the Aga Tax, and when Colonel Blimp’s Conservative MP pops around asking for his vote.

Where is future energy going to come from?