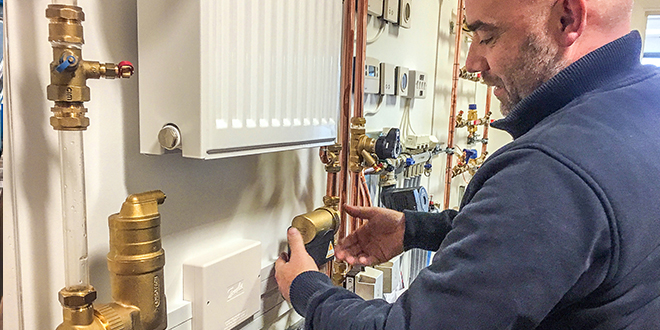 Posted by: jsharpe on April 17, 2018 in Events, Industry News Leave a comment

Following the success of its deaeration training workshops, Spirotech has announced new dates for 2018,  where installers will get the exclusive opportunity to learn more about the importance of deaeration and Spirotech’s market-leading range of air removal and system protection products.

Read what happened when Installer visited a Spirotech training day

The sessions are being held on 25th April, 23rd May, 20th June and 12th September at Spirotech’s UK headquarters in Shirley, West Midlands, which is home to the Spirotech ‘engine room’: a fully fitted out test and demo facility that allows installers to see first-hand how Spirotech products can protect, maintain and extend heating system efficiency. One  further event will take place on 6th June at the Vaillant Centre of Excellence in Glasgow, Scotland, to cater to those based north of the border.

The workshops are designed to allow installers to ask questions, share their opinions and get hands-on with how deaeration works with the help of Spirotech’s specially-designed demonstration units.

The announcement follows a series of successful training events that have taken place over the last two years. The original sessions proved hugely popular among installers, and Spirotech has seen a marked rise in interest in its deaeration products as a result.

Damon Steele, an installer who attended the very first session in September 2016, was so impressed by the training that he has since taken a primary role in organising subsequent workshops. He said: “Before the training, I had been fitting Spirotech units but I didn’t have a full understanding as to why. As an installer, the sessions have been invaluable in teaching us about new products and techniques that will help us do our jobs to the best of our ability.”

Spirotech, which is currently celebrating 50 years of its renowned SpiroVent range of deaeration products, has led the way in deaeration since the products were first launched. The process systematically  removes air – the main culprit behind most common heating system complaints, including noisy radiators, cold spots, lower heat output and higher running costs – from both domestic and commercial heating systems.

Kevan Peaker, UK Business Unit Director at Spirotech, said: “Since our first training event back in 2016, we have seen a step change in the industry when it comes to deaeration. Installers across the UK are now understanding and embracing the concept, and recognising that system health and performance can only be optimised when deaeration is applied.

“Spirotech was at the very forefront of deaeration when it pioneered the concept 50 years ago, and it’s great to be able to share our decades of technical experience and expertise with leading engineers at our training events. Every event has been oversubscribed and we’ve had amazing feedback from installers, who have gone on to adopt deaeration and seen real business benefits. We also use these workshops to stay in touch with our customer base, so they are very much a forum for sharing and discussing views, product feedback and new ideas.”

The session calendar is as follows:

In order to sign up for a session, installers can express their interest to Damon Steele via Twitter (@SteeleDamon) or email Spirotech directly at office_uk@spirotech.com.

Why deaeration is taking off with installers in the UK