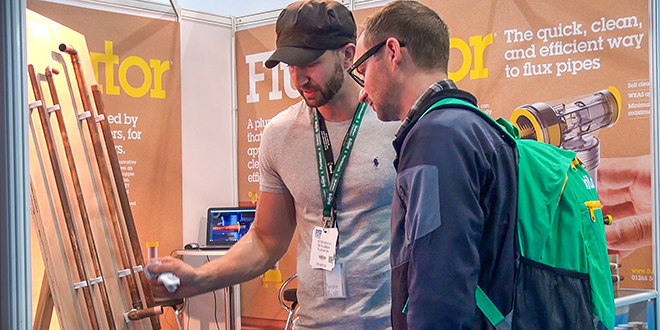 Posted by: jsharpe on June 1, 2018 in Articles, Commentary Leave a comment

The Fluxuator – What installers need to know

It may have started life as an inkling of an idea, but the Fluxuator is increasingly becoming a mainstay in the toolkits of installers across the country. Installer met with the team behind the product to find out more.

When Installer met Dom Fowls and the team behind Fluxuator, they had just come from their ‘pitch’ to a judging panel for the H&V News Awards – where their unique flux applicator tool is shortlisted in the Domestic Heating Product of the Year – Controls, Additional Equipment and Accessories category. Considering that the product only launched in May 2017, it appears to be gaining traction in the industry very quickly.

Born out of Dom’s personal dislike of working with flux, the Fluxuator was actually a long time in creation. “I hated flux. I used to get it everywhere so I started to think about an easier work to work with it. I had the idea of an applicator about nine years ago, but I was busy on the tools so I just put it to one side. Then I had to stop working as a plumber but still needed to make a living, so I took another look at the idea of a flux applicator.

“It may seem like a simple idea – in fact, when I first spoke to my friend and business partner, Zack, about it, he couldn’t believe that no one
had ever done something like it before – but the process of bringing it to market has been anything but simple.”

From the initial research through to the prototype development, every stage takes time, money and effort – and it required a high level of commitment for Dom to keep persevering with the development of the product. While early indications were positive that there was a clear gap in the market for an effective product, a long development period was needed.

The Fluxuator currently on the market is the fourth version developed – including the initial prototype built in Dom’s kitchen out of his dog’s shampoo bottle. And each stage of development has thrown up new challenges and highlighted design flaws.

“We started out with an applicator that would work by squeezing, but we recognised that users wouldn’t be able to get all the flux out. Then we looked at a push-up system – like a gluestick – but we felt that didn’t give enough control over the amount of flux that was released.”

“Then we came up with the twist mechanism – although that hasn’t been without its own challenges. In fact, the launch was delayed by three or four months while we got the mechanics of it just right. We realised that we needed to add a spring so that the unit can be twisted the ‘wrong way’ without damaging the whole thing.”

The design and development is undoubtedly a collaborative process – and Dom and the team are fully aware that this is an on-going scenario – with input, insight and feedback coming not only from the designers (who have very much fulfilled a consultancy role) but also from fellow engineers and plumbers.

For the Fluxuator team, this feedback is crucial because, without the buy-in from the industry, there is no market. While the majority of installers may be using flux, they are not necessarily using an applicator – or even aware that using one is an option – creating both an opportunity and a challenge.

“We’re trying to change something that has been the norm for a long time – so it’s going to happen slowly. There are plumbers out there who
have been applying flux with a brush (or their fingers) for ever. They aren’t going to just go onto the internet and start buying Fluxuators.

“They need to get it into their hands so they can see all the benefits of using it. We can tell them all about how it saves them time and money, how it’s cleaner, prevents the flux from being contaminated, etc, but that will only get us so far.”

“It helps that we have a growing network of installers who are promoting the product off their own backs and helping to spread the message to a wider audience – whether that’s down the local merchant, on social media or at events.”

Increasingly, the heating industry is waking up to the fact that word of mouth is a very successful way of marketing products – both new and old. And social media can make this happen very quickly, generating interest across a wide network of people across the country – and, in some cases, further afield.

For the team behind Fluxuator, it’s been a steep learning curve – not least because they themselves have little or no experience in many of the key areas – such as sales or marketing or distribution. The reality is that, for them, there is a lot of truth in the old expression ‘there’s no substitute for hard work’ – and that approach won’t be changing any time soon.

“We took a lot of advice from a lot of different people – unfortunately, not all of it was good. There are no happy accidents in this process. There’s a lot of work behind the scenes – whether it’s checking for similar products, applying patents, choosing the colour. Right now,
it seems to be paying off – and who knows what will happen in the future.”