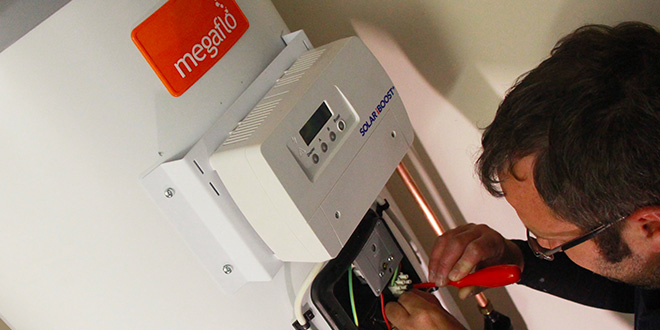 Posted by: jsharpe on June 26, 2018 in Articles, Commentary Leave a comment

Think you know everything there is to know about unvented water cylinders? Think again. Alan Clarke, technical support manager at Heatrae Sadia, examines some of the key facts about cylinder design, how they’ve developed to become the product we know and love today, and the manner in which they will likely evolve in the future:

Unvented cylinders have been available legally on the UK market since 1985, when the UK Building and Water Regulations were amended to allow for their installation. Yet while this might make them seem like a relatively new innovation, the original idea of a water cylinder was actually devised in 1861 by British pioneer Sir Thomas Hawksley.

His creation was deemed to be too dangerous for British homes at the time because it was made from copper, a material which struggled to withstand the high pressures it was subjected to under normal use. The only way to avoid this was to increase the copper gauge which, in turn, made the cylinders expensive to produce. However, his innovation would sow the seed for important future developments within the industry.

The challenge presented by copper prevented the widespread adoption of unvented cylinders in British homes for more than 100 years. In a bid to overcome it, engineers began to experiment with the use of steel.

At first, these cylinders were made from enamelled steel, but they were unpopular because of their weight and the fact that the condition of the sacrificial anode needed to be checked regularly. Eventually stainless steel became the material of choice for both installers and manufacturers because it represented a lightweight option that was extremely strong and had an excellent resistance to corrosion. In a pioneering move, the first Megaflo units were produced from stainless steel in 1988, and it still remains the core material behind the product today.

The cylinder market has been under attack by the growth in combi-boilers for a number of years, but the former has many distinct advantages. With multi-generational living becoming commonplace, and more homeowners coveting extra bathrooms as a means of increasing the value of their property, combi-boilers can, in certain instances, struggle to keep up.

And with more modern solutions, such as Megaflo Eco Solar PV Ready, able to tap into energy supplies generated by renewable methods such as solar panels, they can be an incredibly environmentally-friendly way of heating water for a demanding household.

2- Not all cylinders were created equal

While unvented cylinders might all seem very similar at first glance, there can be a number of differences which can dramatically affect its performance when it is installed in your customer’s home.

In addition to the raw materials the cylinder is made from, installers should also consider the energy efficiency rating of the product, its performance, such as flow rates and recovery rates, and the warranty that is available from different manufacturers.

When looking at a warranty, it is vital to check the terms on offer and check the T&Cs, such as whether parts and labour costs are included and if the warranty can be transferred to new owners when the property is sold.

While it might seem like cylinder development has reached a point at which there are very few gains to be made, that could not be further from the truth.

Over the coming years we’re likely to see even more pressure put on manufacturers to maximise the energy efficiency levels of their products. This will see a continued drive towards renewables, such as hot water thermal energy storage, as well as smart control systems that can monitor and adapt to the heating patterns of the cylinder, helping to save energy.

As ever, Megaflo will be at the forefront of these changes. We’ll be examining how we can use the latest technologies to improve the experience for customers and installers while helping to protect the environment – and that’s why we’re trusted by the best.