Why deaeration is taking off with installers in the UK

Home » Why deaeration is taking off with installers in the UK 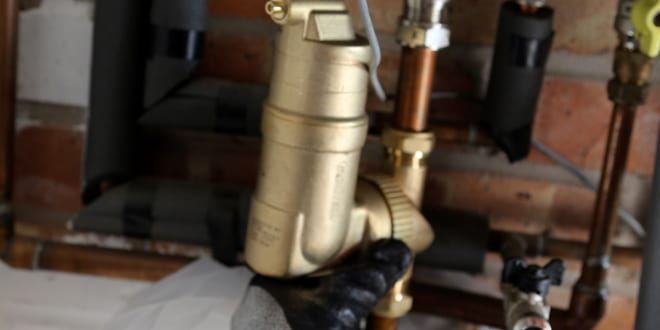 Although the history of Spirotech’s deaerator goes right back to 1968, when Frans Roffelsen discovered that the Spirobuis he had invented was effective at removing air from system fluid, it’s only in recent years that the technology has really taken off amongst installers in the UK.
We sat down with engineers Dean Torris, Hornchurch Heating & Plumbing, Essex, and Andy Carding, AC Plumbing & Heating, Blackheath, who have taken up the torch and are leading the way when it comes to deaeration to find out what their first thoughts were and how it’s benefitting their customers.
When did you first hear about deaeration?
Dean: “I’d been fitting dirt separators for a long time when I first became aware of the concept of deaeration.  I’m sure the first time I heard about it was on Twitter when Spirotech talked about the RV2 – I was already using the MB3 and had been really pleased with how it had been performing, so when they promoted the complementary deaerator I was interested in finding out a bit more.”
Andy: “It was a similar situation for me in that I heard about it from other people. It was probably about two years ago when I was chatting with another engineer who mentioned Spirotech’s RV2 and recommended I looked into the product and how it worked. Once he explained the concept of it, it was an obvious choice to try it out myself.”
How do you explain deaeration to homeowners?
Andy: “For the past year, whenever I’ve been fitting a new or replacement boiler I’ve always recommended to the customer installing the RV2 alongside the MB3 dirt separator as standard. Without getting too technical, I’ll generally explain how the deaerator works and that by removing microbubbles, you help prevent corrosion – most of the time they understand the benefits and are happy to spend that little extra in order to protect their heating system.”
Dean: “Personally, when my team and I are quoting for a homeowner, we’ll always include both a dirt separator and deaerator in the cost so I don’t really ever explain it – I’m not prepared to leave my customers with an unprotected system that will lose efficiency in the long run. If you don’t complete a job well and leave customers with an efficient system, it’s only going to reflect on your reputation and word of mouth is a crucial way of getting new business.”

Without the @SpirotechUK RV2 this air would be pumped into the system.
Looks funny too. @GoodyerDave pic.twitter.com/UfpWF2DPon

Did you attend training before fitting a deaerator?
Andy: “As with any new technology, I think it’s important to attend training where you can in order to find out all the facts and fully understand the products you’re fitting. Personally, I hadn’t done training when I first started fitting them, but I’m still really keen to go along to one of Spirotech’s courses to learn even more and see if there are any tips or tricks they can share that I didn’t know before.”
What have you thought of the results you’ve seen so far?
Dean: “For me, there’s nothing worse than seeing pictures of a dirt separator or filter covered in debris and magnetite – yes it might be doing its job, but if you properly clean the system and install a deaerator, there would be significantly less debris to be collected and removed, which is why I’m such a big fan of the RV2. At the end of the day, it’s always better to invest in prevention – in this case, deaeration – rather than a cure.
“When I’ve gone back to service the boiler, pretty much every customer I’ve spoken to has really noticed a difference in the performance of the heating system – a lot of them have had lower utility bills because it’s more efficient.”
Andy: “Efficiency is a big factor for my customers when replacing their boiler, so any product that can improve the heating system’s performance is a huge benefit. The deaerators I’ve fitted so far have all worked really well in helping to keep the heating system working at its best.”
Dean: “It’s also been really handy when it comes to removing air from the heat exchanger to prevent the boiler from overheating the first time it’s fired. Using a deaerator, I’ve been able to bleed the heat exchanger in 10-15 seconds – I’ve even uploaded videos to Twitter so other engineers can see how it works.”
Would you recommend investing in deaeration to other installers?
Dean: “Definitely. When the twin pack of a dirt separator and deaerator from Spirotech became available, it was a no brainer for me that I’d start installing both. The two go hand in hand, and now I’d never install a dirt separator without a deaerator.”
Andy: “Personally, I think it’s really important to protect a heating system the best you can in order to future-proof it, and having seen how well a deaerator can work, I believe it should be a mandatory requirement for all systems.”
For more information on how Spirotech can help you maintain system efficiency, including its range of deaeration solutions, please visit www.spirotech.co.uk