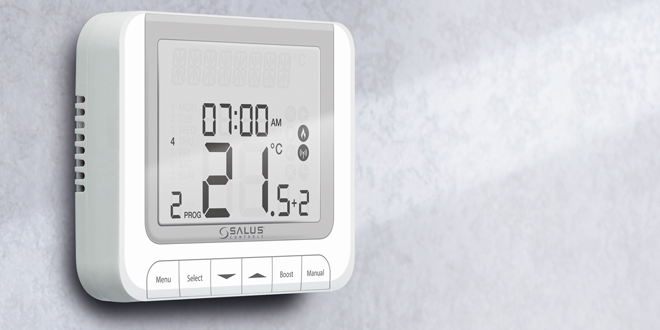 Posted by: jsharpe on December 17, 2018 in Heating, Technical Articles Leave a comment

SALUS has launched the RT520 series – a cost-effective thermostat range that meets the requirements of Boiler Plus without the need to install smart controls, courtesy of an OpenTherm, Load Compensation energy-saving feature.

Available as wired and wireless RF versions, the RT520 is a simple, battery-operated, digital-display room thermostat with a large easy-to-read LCD.

Making use of the industry leading OpenTherm protocol, the thermostat enables the boiler to be modulated, offering improved control and efficiency by only using the necessary amount of fuel to heat the water to the required temperature.

Both models also feature a new suite of additional operational and efficiency functions. These include a notification that the boiler requires servicing, and a PIN option that enables landlords and building owners to only access certain settings and menus on the boiler. The thermostats also boast an improved ErP rating that verifies the overall efficiency of system.

Installer caught up with Andrew Tyler from Smart Boilers Ltd, who’s also admin of the Facebook group Stat Chat. As a thermostat expert, Andrew installed the RT520 in his own home to test it out: “For new boiler installs the RT520 is ideal. It’s so easy to fit and so flexible that you literally can’t go wrong. I fitted it in less than 15 minutes, it was a breeze.

“As it’s battery-powered and wireless it gives the installer and the customer so much more flexibility than hard-wired stats.

“My wife really liked how it worked. She doesn’t want apps on her phone to control the heating, and a lot of customers are the same. She doesn’t bother with the programmer but the RT520 is so simple, she can use the buttons to turn the heating up and down, it’s given her a lot more control.

“As engineers, we’ve been crying out for this type of thermostat, and all the feedback I’ve read on Stat Chat is positive as well.

“I’m definitely going to offer this as my entry-level Load Compensation stat. It’s us as conscientious engineers that want to make sure our installations are Boiler Plus compliant, and the RT520 is an easy and cost-effective way for us to do that.

“Most customers don’t know or care about Boiler Plus, and lots of them don’t want smart controls. When you start talking to them about smart stats, some people think you’re trying to upsell them, and others have asked me whether they can be hacked, or told me they’re too complex.

“The RT520 means we don’t have to have these conversations, because it’s as easy-to-use as a traditional on/off stat, it’s very low-cost, and it’s got load compensation so it’s 100% Boiler Plus compliant.

“There’s nothing else like this on the market. It’s the best in its class because it’s the only thing in its class.

“It’s a 9/10 for me because it can’t get any better at what it does, and it’s not trying to be anything else.”

For more info about the Salus RT520, visit: https://salus-controls.com/uk

Stat Chat is an online community of heating and plumbing engineers who are interested in heating controls. It’s a place where people can ask questions and offer advice about the fast-evolving thermostats and controls industry. Search for ‘Stat Chat’ on Facebook to get involved.