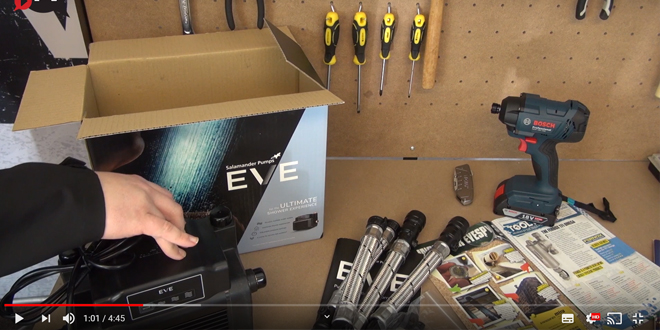 Posted by: jsharpe on April 24, 2019 in Installer TV Leave a comment

In an industry-first move, Salamander Pumps, one of the UK’s leading manufacturers of domestic water pumps, has announced the launch of EVE – a new, twin-ended, universal shower pump featuring a variable bar rating, which can be changed with just the touch of a button. Here, Ken Vance, Training Manager at Salamander Pumps, explains everything you need to know about the brand new shower pump.

The first of its kind, EVE uses a sensor to monitor the system water flow and detect any changes, while a brushless motor varies its speed to ensure a constant pressure, no matter how many outlets in the home are open at any one time.

Launched in response to the increasing popularity of high-end bathroom refurbishments, EVE is the first shower pump on the market to fit into both positive and negative head situations, without the need for a pressure vessel and working with any gravity-fed system.

The four-patent pump has a flat-line flow curve, thanks to its ability to increase the motor speed to sustain a high water pressure as and when the demand increases. In fact, EVE’s motor varies speed to maintain constant pressure* with up to 40 litres’ flow, and can be set to 1.5 bar, 2.0 bar or 3.0 bar.

This technology also means that there is no longer a need for installers or homeowners alike to identify the pump with the correct specification based on the size and needs of the house. If the house has a gravity fed system, EVE will work.

The design of EVE allows for home owners to swap between bar ratings with just the touch of a button, even after installation. Featuring a touch selection on the pump, the interface shows customers which pressure the pump is set to and allows them to increase or decrease this as they wish, meaning that homeowners can increase the setting of the pump up to 3.0 bar when they want a higher-powered shower, and can equally bring the pressure down to 2.0 or 1.5 bar just as easily.

EVE also features crossover technology, which allows pumps to boost both hot and cold water at the same time, as well as independently of each other. Its innovatively-placed bypass tube allows for pressure to be relieved in situations where only one side of the pump is supplying water e.g. when a single tap is being used, while the other end of the pump is running on a ‘closed head’, stopping the pump from overheating.

Following the re-engineering of Salamander’s Right Pump range, EVE features the latest and most innovative technology, meaning the pump has four granted patents; on its bypass, integrated electronics, motor pump integration, and Electronic System Protection (ESP). As well as this, EVE has robust brass connections which enhances the strength, rigidity and reliability of the pump.