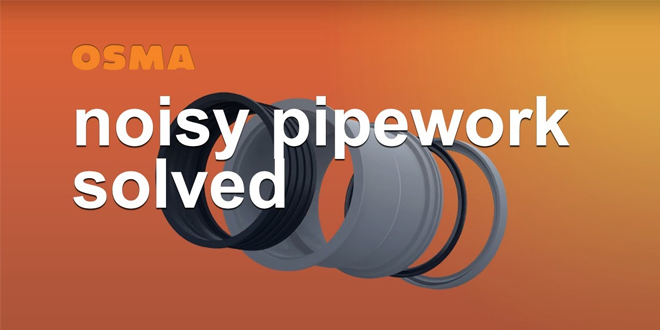 Posted by: jsharpe on November 4, 2019 in Technical Articles Leave a comment

What are Acoustic Couplers and how can they tackle noisy soil stacks? Osma’s drainage genius gives his views

We’ve once again caught up with Tim Wootton, Osma’s technical services manager, to answer your drainage questions. This time, he’s tackling the issue of noisy soil stacks. Over to you, Tim:

I often get approached by installers whose customers are complaining of noise coming from the pipework in their home. It’s surprisingly common – in fact, according to the National House Building Council (NHBC), loud drainage makes up 15 per cent of all noise complaints. Many believe that little can be done to correct the issue, but actually all installers have to do is follow a few simple steps and they can help flush out unwanted noise for good.

The first step to reducing noise from pipework is to understand what’s behind the issue.

Typically, the main culprits for noisy pipework are a lack of allowance for thermal movement in the system, alongside contact with rigid brackets and the structure. As the pipes carry water through the soil stack, they expand and contract. Combined with water impacting on the pipe walls, this movement creates a structure-borne sound which transmits from impact zones between pipe and structure. Over time and left unchecked, the effect can be particularly loud and causing a potential annoyance and source of misery for homeowners.

Installers need to watch out for these potential issues as preventing noisy drainage is now a legal requirement. According to Part E of the Building Regulations (2010), there can only be a maximum of 45 decibels produced from sanitary noise during the daytime.

By making a few adjustments, installers can tackle this issue and put an end to annoying drainage noise. Firstly, and most obviously, a soil stack should to be designed for noise reduction from the outset. By avoiding sharp changes in the direction of the water flow and ensuring there are no offsets in the wet portion of the stack, you’ll be well on your way to a peaceful system.

It is also crucial to ensure there is sufficient room for expansion and contraction when installing the soil stacks. Doing this will also help reduce potential noise from your soil system. This is something that specialist products and materials can help with. For example, from our extensive research we have developed the Osma Acoustic Coupler 4S125, which can replace standard pipe couplers at joints, making the job of measuring expansion gaps a thing of the past and the overall installation quicker and easier. It also reduces structural-borne sounds caused by contact between the stack and the structure of the building.

When installed across every floor in a building, it can also limit the noise transfer between pipes separating floors and walls due to the following benefits:

If you’re having issues with noisy drainage, find out more about the Acoustic Coupler or take a look at this demonstration video which explains the benefits in more detail.