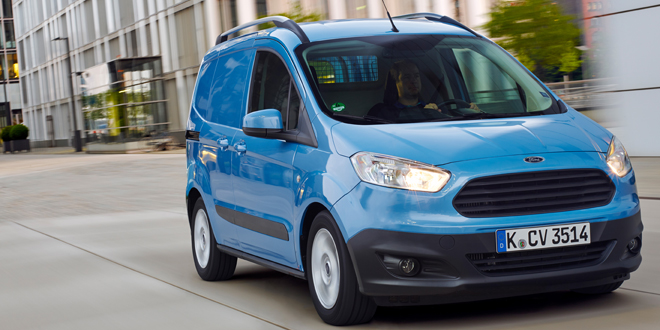 Posted by: Installer Online on August 19, 2014 in Vehicles Leave a comment

The all-new Ford Transit Courier will offer van operators best-in-class fuel efficiency and load space when the first models are delivered to customers in spring 2014.

The stylish all-new Transit Courier offers 10 per cent more load volume than its direct competitors with 2.3 m3 behind the bulkhead, as well as longer load length at floor level, and greater access width through the sliding side doors.

The compact and versatile van also brings a new level of technology and functionality to the segment with class-leading safety features, in-cab stowage space and connectivity, including Ford SYNC with Emergency Assistance.

Aimed at the urban delivery market and small businesses requiring a functional and compact van, the all-new Transit Courier will generate new sales for Ford in the fast-growing European small commercial vehicle segment. This adds to the momentum created by the larger products from the completely redesigned and expanded Ford Transit range.

Following the introduction of the all-new Transit, Transit Custom and Transit Connect models starting in late 2012, Ford’s share of commercial vehicle sales has grown to 10.4 percent in the first three months of 2014 – the company’s highest for the period in 16 years. Year-to-date, Ford has sold about 50,000 commercial vehicles, an increase of 10 per cent over the same period last year.

“The all-new Transit Courier is an affordable, hard-working van that offers unrivalled fuel economy and bigger load space than its closest competitors,” said Paulo Giantaglia, chief programme engineer, Transit Courier, Ford of Europe. “This is the perfect vehicle for today’s busy city streets, and will bring Transit capability to a whole new group of customers.”

Class-leading efficiency, cost-of-ownership and durability
All-new Transit Courier’s highly-efficient diesel and petrol engines contribute to class-leading cost-of-ownership. In addition to the 1.6-litre diesel and 1.0-litre EcoBoost engines, customers can specify the 75 PS 1.5-litre diesel that also betters all rivals with 103 g/km CO2 and 3.9 l/100 km (72.3 mpg). Fuel-saving Auto-Start-Stop is available as an option throughout the range.

All powertrains offer extended one-year/30,000 km service intervals and the vehicle design has been optimised for ease of serviceability and repair. A multi-piece rear bumper, rugged body-side protection and high-mounted front and rear lights help to reduce the cost of accident damage and lead to lower insurance premiums. Expensive fuelling errors are avoided by the unique, standard-fit, Ford Easy Fuel system.

All-new Transit Courier has been engineered to deliver exceptional reliability, and prototypes have been tested over the equivalent of 1.6 million km, or two return trips to the moon. The durability testing is designed to simulate years of extreme use, and includes more than 400,000 km in typical customer operating conditions on public roads. The doors have been slammed 250,000 times in non-stop endurance tests to ensure reliability.

Best-in-class load-carrying ability and practicality
The all-new Transit Courier has a load compartment which offers superior load-carrying features compared to its direct rivals, including:

With a maximum payload capacity of 660 kilogrammes, the Transit Courier can accommodate a wide variety of cargo and equipment, including a standard Euro pallet. For optimum access to the load compartment, twin asymmetric rear cargo doors with an opening angle of up to 158 degrees are standard; single or dual sliding side load doors can be specified.

Commercial Kombi versions offer room for up to five occupants with flexible 60/40 split folding rear seats with a tip/tumble mechanism for additional versatility or dual business/personal usage; a generous load volume of 1.69 m3 is available with the rear seats tumbled.

The cabin offers an ideal mobile-office environment, with a class-leading range of stowage features including a large centre console capable of storing A4 documents and small laptops; a full-width overhead stowage shelf; and a drawer under the front passenger seat. Drivers can use the unique new MyFord Dock to store, mount and charge their mobile devices such as phones and navigation systems; other smart interior features include Rear View Camera.

Customers can specify Ford SYNC with Emergency Assistance, the latter of which assists the occupants to call the local emergency services operator in the event of an accident, along with Speed Limiter and Tyre Pressure Monitoring. The standard Electronic Stability Control system features Hill Start Assist, Traction Control and Roll-Over Mitigation.

The new vehicle’s chassis has been tuned with a unique steering ratio and innovative dual-rate rear springs that help to deliver class-leading driving dynamics under all load conditions. The springs enable the vehicle to offer a smooth and refined ride even when unladen, while maintaining the agile handling and manoeuvrability of a compact vehicle in busy city streets.

* The stated fuel consumption and CO2 emissions are measured according to the technical requirements and specifications of the European Regulation (EC) 715/2007 as last amended. Results in MPG also correspond to this European drive cycle and are stated in imperial gallons. The results may differ from fuel economy figures in other regions of the world due to the different drive cycles and regulations used in those markets