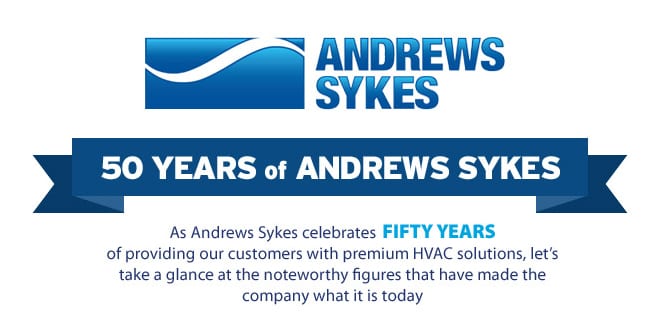 This month the UK’s leading specialist in air conditioning, pump, heater and cooling hire Andrews Sykes celebrated its 50th anniversary after being established as Andrews Industrial Equipment in the mid Sixties.
As well as designing a new logo to recognise this landmark, the brand has also put together an insightful infographic which outlines some of the brand’s achievements, such as the rapid expansion throughout Europe and beyond.
The visual also refers to some of the large-scale projects Andrews Sykes has been involved in, including a chronological breakdown of the company’s history – from opening a first depot in Holland to supplying cooling equipment to the Burj Khalifa in Dubai – and thus condensing Sykes’ most significant years into easily digestible snippets.
Having begun the longest ever sponsorship deal in UK motorsport history back in the Seventies, nowadays Andrews Sykes’ interest in sport still remains as strong as ever, having become the shirt sponsors of Charlton Athletic and both the London Olympics and Commonwealth Games to name a few.