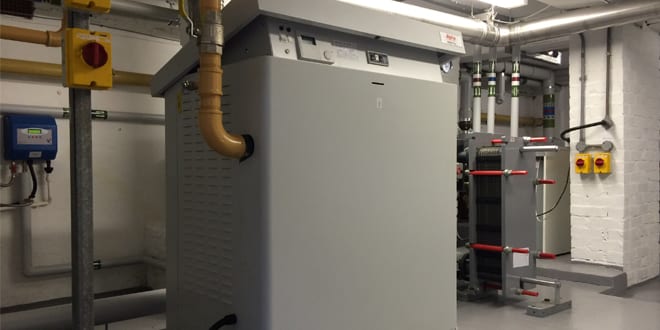 When the heating system at Alpha Heating Innovation’s head office, Nepicar House, was at the end of its life, the company recognised how it’s own ARES Tec commercial system would provide the ideal replacement for the inefficient, non-condensing cast iron boilers.  The company subsequently installed an ARES Tec 200kW model complete with safety kit and plate heat exchanger.
Nepicar House comprises a converted and modernised 18th Century Manor House with two modern attached two storey office extensions.  The original part of the building is believed to be circa 1700.  It has been converted to offices and modernised on a number of occasions.  The two office extensions are believed to have been constructed in the mid 1970s and mid 1980s.  They were then refurbished in 1999.
Alpha occupies part of the two office extensions alongside Offset Group and Cygnet Healthcare.  The Manor House is occupied by Unity Media.  Total headcount for the buildings is 131 across a total space of just over 1,900 sqm.
Justin Jearum of Alpha Heating Innovation commented: “With the old system being 20 years old, it was extremely inefficient, particularly for such a large space where a variety of different needs needed to be met.  In addition, as the building’s owner, we needed to ensure that those that occupy the building, including our own employees, are provided with a comfortable working environment.”
The ARES Tec boilers are known for their exceptional energy efficiency, low emissions and ultra low operating noise levels.  In addition, the utilisation of this boiler meant that there is no need for a ‘backup’ boiler thanks to its modular design.  As such, the 200kW model was able to take the place of the original two boilers because should a single module fail on the ARES Tec, the boiler would be able to continue to operate.
The ARES Tec incorporates self-contained modules to provide a greater transfer of heat. Each has its own down-firing pre-mix burner, fan, ignition and safety controls to assist in the changing demands of buildings with a number of different occupants.
An integrated E8 Boiler Cascade Manager spreads the load evenly between heat modules, optimising the ever-changing demands on the boiler, common within larger buildings, this helps to provide a rapid warm up time in response to multiple requests. Independently if demand falls low enough, the boiler can run on the minimum output of a single module, minimising energy use. To ensure equal daily rotation and even running times, the boiler cascade manager alternates the ignition of the modules every 24 hours.  The E8 controller provides full fault diagnostic and commissioning displays for individual modules.
Stephen Burton, Managing Director of Antac Support Services, the installers of the system at Nepicar House commented: “We have worked with Alpha for years and have always been impressed by the products they offer.  The ARES Tec is one great example and was ideal for this application thanks to its exceptional ability to cope with high heating and hot water demands of a multi-occupant building such as Nepicar House.”
Alongside the boiler, Alpha’s safety kit was installed.  The kit ensures that the boiler pressures are kept within specific tolerances, with the use of adjustable high and low pressures switches, an additional overheat stat adding to the high level of safety.  The kit also includes a flow switch – should there be a lack of circulation such as pump failure and / or blockage, this will be activated.
The new ARES Tec is controlled via Alpha’s BM8 zone manager.  In addition Alpha is able to plug into the boiler via a laptop to to gain data relating to the system’s modules.
Justin continued: “The new system has provided the ideal solution for these buildings and it is foreseen that more than 20% gas saving will be achieved as well as reduced CO₂ footprint. What’s more, the building occupants now have a consistently comfortable working environment.  It was great to be able to use our own system for this installation.”
For more information on Alpha Heating Innovation, visit www.alpha-innovation.co.uk