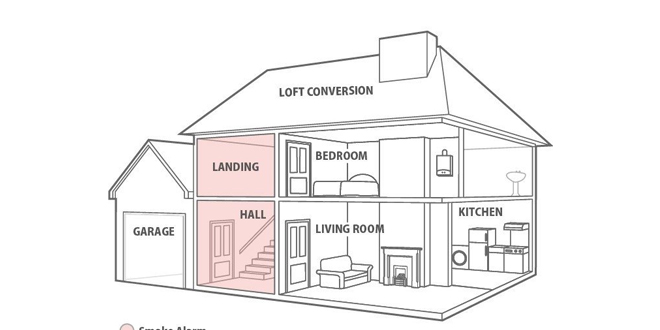 Posted by: jsharpe on May 17, 2019 in Technical Articles Leave a comment

The BSI’s recent update of the domestic fire detection and alarm system standard, specifically Part 6 of BS 5839, outlines the code of practice for the design, installation, commissioning and maintenance of fire detection and fire alarm systems in domestic properties. Here Ian Ballinger, Certification Manager for FireAngel, outlines the key updates professionals should be aware of in order to ensure constant compliance when specifying, installing and maintaining fire detection systems in domestic properties.

First launched in 1995, British Standard BS5839-6 has long established itself as a key reference standard for specifiers, architects and fire safety personnel, outlining the specific systems that should be installed for the purpose of life safety and property protection. Covering the implementation of fire precautions in domestic premises, including HMOs and sheltered housing, throughout both the dwelling units and common areas, the Standard is applicable to both new build and materially altered dwellings (in conjunction with regional building regulations) as well as existing properties. The recommendations can be applied to the fire detection components of combined domestic fire and intruder alarm systems, or fire and social alarm systems.

New recommendations have been added for fire detection in supported housing in particular, whilst revised guidance on the installation of communal fire alarm systems in purpose-built blocks of flats has also been introduced. The Standard has also been updated to reflect the updates made to Part 1 in 2017, which addresses non-domestic premises, combined with any other updates made to other Standards since the last full revision.

Below we outline the key changes to the BS 5839-6 Standard and the areas professionals should be aware of to ensure they’re offering individuals the highest standard of fire protection throughout all types of domestic properties. This applies to architects, building professionals, installers and enforcing authorities.

Whilst BS 5839-6 has previously been split into six varying Grades, each outlining the level of protection appropriate for certain properties and their corresponding levels of risk, the new update has altered the six sections, removing Grade B and Grade E, whilst Grade D and Grade F have been split into Grade D1 / Grade D2 and Grade F1 / Grade F2 respectively. Grade C has been revised and its recommendations expanded. The new grading system is as follows:

Grades B and E have become obsolete in the latest version.

Professionals should adhere to the above grades when designing, constructing and managing fire detection and fire alarm systems in domestic properties. They should also be aware of the revisions made to Table 1 of The Standard, which outlines the minimum grade and category of system that should be installed to provide protection of life in typical premises. The updates have been made to reflect current living conditions.

In conjunction with Table 1, a new table has also been created, which outlines the recommended testing and servicing by grade to prevent the blocking or delaying of fire alarm signals transmitted via social alarm systems in sheltered housing to an alarm receiving centre.

With regard to categories, the standard of protection in sheltered housing flats has been increased from Category LD2 to Category LD1, positioning it as a higher potential risk. This therefore constitutes the installation of a system throughout the premises that incorporates detectors in all circulation areas that form part of the escape routes. This also includes installation in all rooms and areas, other than those with negligible sources of ignition, such as toilets, bathrooms and shower rooms. The three categories are listed below and outline where fire detection systems should be installed:

(Alarms in all circulation spaces that form part of escape routes and all areas where a fire might start, but not bathrooms, shower rooms or toilets, such as hallways, landing, living room, kitchen, bedroom, airing/meter cupboards, loft and garage)

(Alarms in all circulation spaces that form part of escape routes and rooms or areas that present a high fire risk such as hallway, landing, living room, and kitchen)

The latest updates also outline the recommendation of optical smoke alarms or Multi-Sensor fire alarms featuring an optical sensor, such as FireAngel’s SM-SN-1 (Grade D1), ST-622 (Grade F1), to be installed in circulation areas such as hallways and landings. Heat alarms should also be installed in kitchens to provide appropriate protection. Interconnected alarms should also be installed throughout a property, dependent on the specific grade, through hard-wiring or wireless connections.

By following the latest changes to BS 5839-6, professionals can ensure the systems they install are not only fit for purpose for current living environments within domestic premises, but also ensure individuals are provided with the highest forms of protection available, contributing to the reduction in the number of fire deaths and injuries that occur each year.

For more information on FireAngel and its range of smoke, heat and carbon monoxide alarms, call 0800 171 2009 or visit www.fireangel.co.uk.