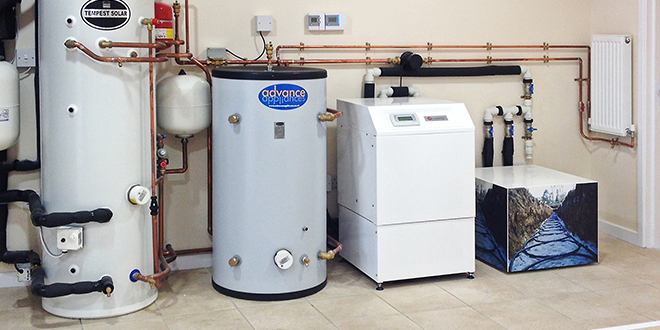 Posted by: jsharpe on October 28, 2016 in Heating, Technical Articles Leave a comment

When buffer tanks should and shouldn’t be fitted

Heat pump installations, both ground and air source, will often include a buffer tank. Guy Cashmore – Technical Director at Kensa Heat Pumps – explains the role of the buffer tank and provides recommendations for when they should or shouldn’t be fitted.

A buffer tank is typically just an insulated vessel of water – it doesn’t usually contain any coils or heat exchangers. Most will have top and bottom connections, and some will have a baffle plate internally. Buffer tanks shouldn’t be confused with thermal stores as they are not a substitute for a hot water cylinder.

Not all systems have or need a buffer tank. Quite often, it’s possible to use the heating distribution system itself as the buffer, assuming that a number of zones or radiators can be left permanently open and uncontrolled, then the minimum flow and volume requirements can be met by the system itself.

A good rule of thumb is ten litres of water per kW of heat pump capacity for the volume and two litres per minute per kW for the flow, but obviously different manufacturers will have varying requirements in this respect and this needs to be carefully followed.

If a buffer tank is to be used, the way it is connected is important.

Although one or two specific exceptions do exist, this design should be avoided if possible as it will cause a permanent drop in system efficiency for no gain whatsoever.

A better arrangement is to connect a buffer tank using two connections only. This will prevent most of the flow passing through the buffer under most operating conditions, therefore minimising mixing. Only under very light heating load will most of the flow enter the buffer, so the buffer only comes into play when it is actually necessary.

The unwary installer could easily think that fitting a thermal store was a good substitute for both a buffer tank and a hot water cylinder, but, when sourced from a heat pump, this is not a good idea. Although the thermal store will usually function satisfactorily as a buffer, they don’t make good partners for heat pumps because all the space heating load then has to be served at DHW production temperatures. This will typically lead to very poor efficiency and result in high electricity bills.

A buffer tank can also be used for daily energy storage, although currently in the UK – due to the lack of viable variable rate electricity tariffs – these types of installations are rare. To serve this purpose, the buffer will often have to be several thousand litres – finding a suitable location for this in a property without a basement can be a challenge. It also needs to be very well insulated to avoid the heat losses negating any saving in running costs.

The heat pump runs when the electricity is cheap, heating up the buffer. Later on, when electricity is expensive but heat is required, the energy stored in the buffer can be delivered to the house with only a low wattage circulator pump required to run.

Systems like this don’t actually save any energy. Indeed, they may actually increase energy consumption slightly due to the system losses, but they can, given the right tariff and good design, reduce the actual running costs significantly