Posted on February 12, 2014 by Installer Online 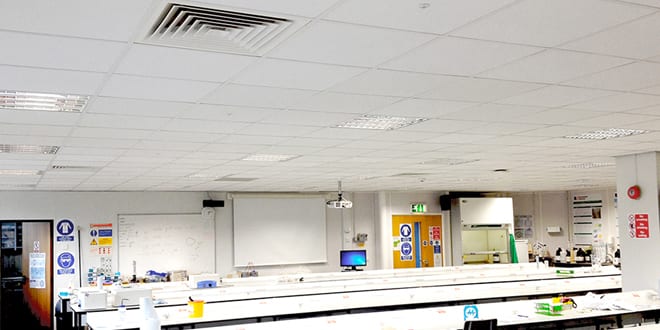 Cool-phase®, Monodraught’s ceiling-mounted low-energy cooling and ventilation system featuring phase change material technology, has been installed in a busy laboratory at Bournemouth University to provide a more comfortable, environmentally-friendly and energy-efficient atmosphere for students working in the space.

The second-floor laboratory in Christchurch House regularly accommodates up to seventy students at the same time, carrying out practical scientific experiments. With Bunsen burners and fume cupboards being used throughout the day, and seventy people, each student generating 100 Watts of heat gain combined with substantial levels of carbon dioxide (CO2), there were on-going problems with the 100 square metre space due to poor indoor air quality. Whilst the laboratory was fitted with windows, its second-floor location meant that restrictors were fitted; so the limited amount of fresh air entering the space was not enough to reach all areas of the ‘deep-plan’ space.
The University’s Estates Department decided it was time to address the problem and the Henderson Green mechanical/electrical engineering consultancy based in Southampton, which supplies design services to Bournemouth University on a range of projects, was briefed to improve environmental conditions within the space.
Henderson Green managing director Russell Pitman says first thoughts involved traditional approaches such as AC units or a roof-mounted air handling unit pumping fresh air into the laboratory.
But having discussed options with the University’s Environment & Energy Team it was decided to investigate alternatives that would also provide a low carbon solution.
Commenting for the University, the Estates Department’s Energy Officer (Technical) Dave Archer says that during the initial search he came across a Cool-phase article in a HVAC journal and decided to add the new system to the list.
The Cool-phase system, which reduces the running costs of buildings and creates a fresh and healthy indoor environment without compressors or hazardous coolants, can maintain temperatures within the comfort zone, while radically reducing energy consumption by up to 90% compared to conventional cooling systems.
Henderson Green was then asked to undertake a feasibility study to establish whether Cool-phase could handle the two key objectives – the fresh air requirements and the cooling load; and Monodraught was asked to design the system and provide calculations to confirm it could achieve the required flow rates, etc.
Says Russell: “We reviewed, and eventually tested, Monodraught’s Cool-phase system against the air handling option and found that from the energy-saving viewpoint Cool-phase won hands-down, with relatively little increase in cost. Encouraged, we then went into a more detailed phase with Monodraught to ensure that the initial calculations matched the requirements of the space in everyday operational conditions.”
Once the air quality calculations and financial appraisals were completed and the University was satisfied that the system would do the job, Cool-phase was given the green light and two systems were installed in the laboratory by Monodraught, as part of a turnkey contract with one of the University’s approved building contractors.
Commenting on the installation Russell Pitman says everything went very smoothly, the project was delivered on time, with a minimum of fuss and no real issues and commenting on the Cool-phase itself he says it is almost too good to be true because it ticks every box.
Regarding the consultation period, he says Monodraught was very professional; and very flexible in incorporating changes the University team wanted to make to the initial calculations.
“In all, the working relationship was a very pleasant experience.” He says: “Work to install the two Cool-phase systems was carried out over four days, and even though some minor structural issues were encountered, the work didn’t stop – Monodraught’s team worked around the problems so that everything went smoothly and the job was delivered on time.” He adds that, besides improvements to the laboratory environment the Cool-phase system is also very quiet in operation, which is ideal in a space that is used for lectures.
Since completion of the installation Monodraught has been monitoring the laboratory’s environment to gather its own data, and the University Estates Department has also been recording data from the Cool-phase system on its BMS. Performance data from both parties will be reviewed to establish the overall effectiveness of the installation.
Dave Archer says Monodraught Windcatchers and Sunpipes are located in other areas of the campus and they have also proved to be very effective, so while it is too early to be definitive, early indications are that the Cool-phase system will perform to specification. He also anticipates that, at the end of the first year, the data will enable the Cool-phase software to optimise the system’s performance to best suit the laboratory space.
Cool-phase, Windcatcher and Sunpipe are registered trademarks owned by Monodraught Limited. 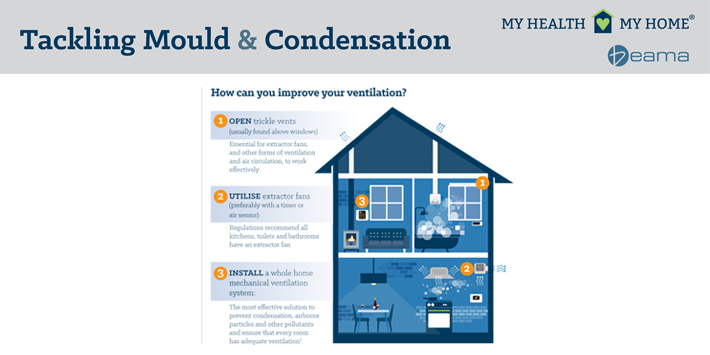 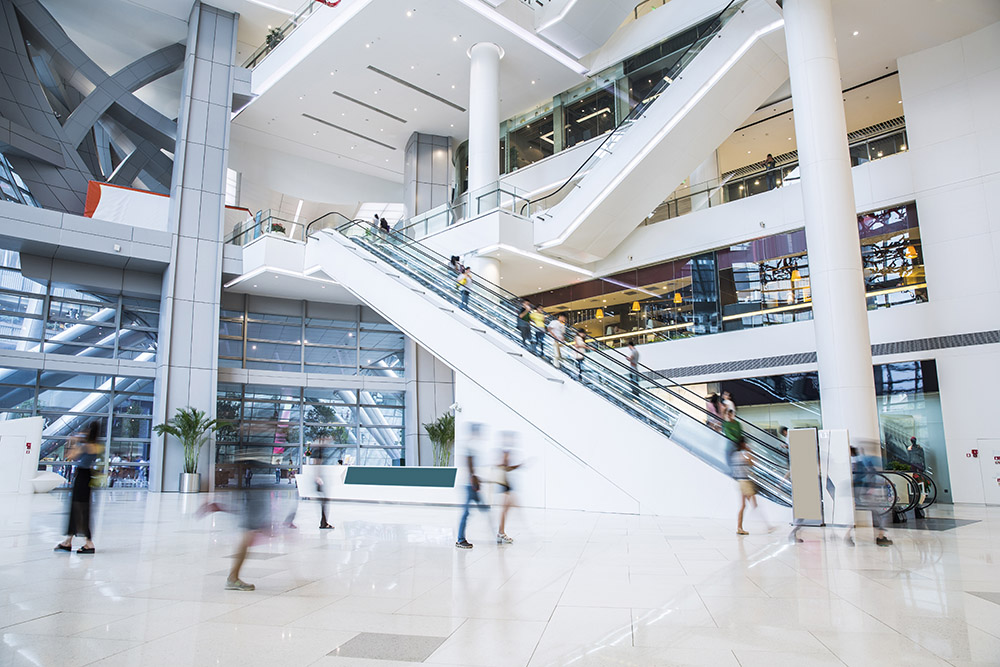