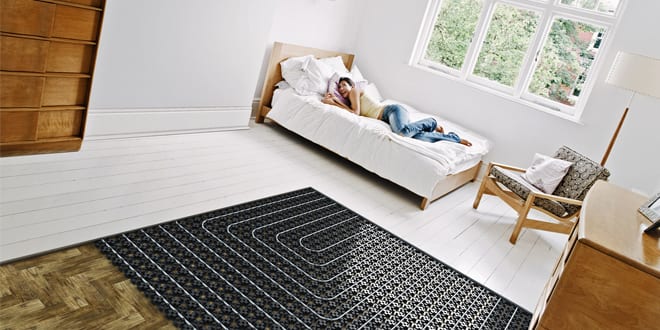 While the reputation of domestic underfloor heating (UFH) has undergone a significant transformation over the last decade, it has always encountered one major stumbling block – its ability to be retrofitted into existing properties. 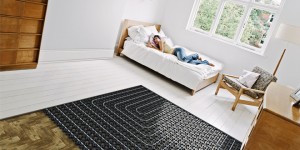 Neil Young – Applications Manager for Indoor Climate at Uponor UK – dispels the myths about retrofitting underfloor heating systems.
The energy-saving benefits of a water-based UFH system – as well as the improved ‘comfort factor’ (compared to convection heating) – have not gone unnoticed in recent years. The steady rise in demand here in the UK has encouraged greater product development and, consequently, wider accessibility to the technology. Yet among existing homeowners, a perception remains that water-based UFH technology is not a viable option for retrofit projects.
Understanding the options
While retrofitting water-based UFH has traditionally presented a number of problems, recent innovations are making it increasingly practical. Historically, installers had two choices – dig up the existing floor and lay a traditional UFH system as if it were a new-build or install an overlay system on top of the existing floor. Both have their merits yet they also come with their own distinct disadvantages.
Completely removing an existing floor in a property in order to fit a UFH installation is a costly and time-consuming process – both for the installer and the homeowner. First, the entire area must be cleared and the existing floor dug out before a new UFH system can be installed.
Installing UFH this way does allow for adequate flooring insulation to be fitted prior to the system install – maximising the overall efficiency of the new system by minimising heat-loss through the floor. Also this method negates any potential loss of floor height for homeowners as well.
However, the overall cost and inconvenience to the homeowner is often felt to be too high and, as such, it is realistically only available to a limited few who have the capacity to invest in such a procedure.
It is not a mass-market retrofit solution because – despite the reduction of energy bills associated with UFH due to its low operating temperature – the cost of completely gutting a property is unlikely to be recovered by the savings on future energy bills. So, while this method is effective, it is not economical.
The other traditional retrofit UFH solution available is to fit an overlay system. It can be installed over the top of an existing screed floor and, once a position and route for the manifold have been identified and subsequently fitted, the installation can be completed relatively quickly. The process involves either laying pipe on top of a mat and then stapling it down, or using floor panels with pre-determined pipe grooves.
Once laid and tested, the pipe can be covered with a further layer of screed. When dry, the desired floor covering can then be fitted.
Compared to the method discussed previously, using an overlay system will result in a much quicker and cheaper installation. However, in most cases an overlay system will take at least an inch off a room’s height.
It is important to stress this to a homeowner as it will inevitably mean that other actions must be taken retrospectively – such as planing doors, skirting boards and other permanent fixings.
The reality is that it can be quite surprising how different a room can look with such an increase in floor height, and some homeowners may not appreciate this change if they were not made fully aware of the visual difference prior to installation.
New technologies 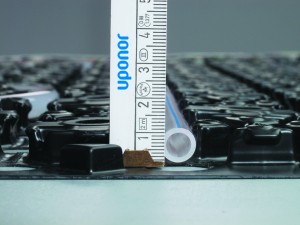 While these two methods of installation give homeowners effective access to waterbased UFH systems in existing properties, they are not without their compromises. Yet the rise in consumer demand for UFH has led to the emergence of more innovative system designs, including streamlined overlay systems such as Uponor’s Minitec system, that can add as little as 15mm to the floor height.

Such a thin overlay technology can offer the best of both previous retrofit UFH installation methods – quick installation time (24 to 48 hours depending on room size), lower total system cost for the homeowner, and a minimal impact on room height.
Furthermore, if a system has a completed installation height of only 15mm, the pipes are much closer to the finished surface. This means that the system can operate at an even lower temperature while still achieving the same level of radiant heat as other systems because the heat has less distance and material to travel through.
If combined with renewable technologies such as ground or air source heat pumps, a thin overlay system will cost even less to run.
One final thought
While both the added comfort factor and the energy saving benefits of a retrofit UFH system are important drivers for  customers, one point that must be considered before an installation takes place is insulation.
Many properties built in recent years include a layer of insulation within the ground floor construction. However, some older properties do not. Unless the floor is being completely taken out – thereby providing an opportunity to install this insulation – there is no guarantee a UFH system will perform to its maximum operational efficiency.
Cavity wall and ceiling insulation will help keep heat in, but it is important to ensure customers are fully aware of the effect of minimal installation in order to avoid an underperforming system being linked to the installer rather than the lack of insulation.
Retrofitting UFH systems has proved a difficult act to balance in terms of homeowner expectation versus cost. However the rise in homeowner demand has led to the development of innovative products that can be installed quickly, offer little impact on room height, and reduce fuel bills while contributing to an all-round more comfortable heat source for homeowners.
Change is afoot within the HVAC industry so it’s time to capitalise on customer demand for UFH and show them how easy it is to access. 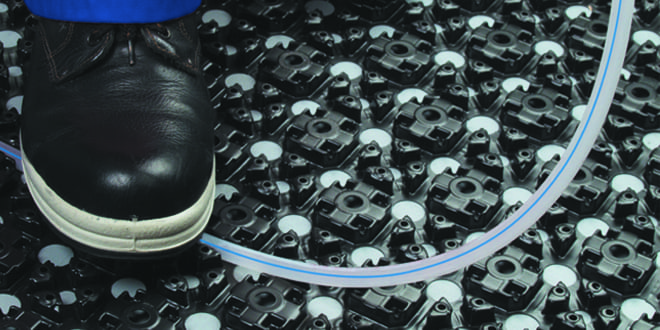