Don't be a drip – network

Posted on November 12, 2012 by Installer Online 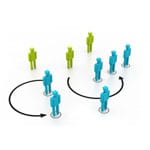 Plumbers are now one of the top five professions in the UK to benefit completely from networking groups according to recent figures released from the world’s largest networking organisation – BNI – Business Networking International.
Plumbers who network are not feeling the recession. There are over 90,000 Plumbers in the UK. All of them rely heavily on word of mouth recommendations. However to generate new business they have to do two things; provide excellent service and “hot up” their networking skills. Plumbers are practical by nature. They like to do a good job and complete the job right.  However they do have a reputation for unreliability.
Charlie Lawson, national director of the UK’s largest networking group BNI says:
“What would make a consumer choose any one plumber over another – would it likely be because the plumber was recommended to them. There’s a much better chance of getting a recommendation from someone you know and trust when you get a good product or service.”
We know from our own research that recommendations are the best way to generate new and repeat business. There are hundreds of Plumbers in BNI – we train them all to be very effective at generating new business and our figures show it’s working for them.”
BNI (Business Network International) is the UK’s largest SME business networking and referral generation organisation.  It has more than 13,000 members across UK and Ireland. BNI has revealed that Plumbers are among the top 5 categories that are most likely to join a networking group and are looking to win new clients through business networking. Charlie Lawson explains further:
“It’s really about building relationships: it may not be the person you are talking to but someone in their network who ultimately buys your product or service because you have been recommended on the strength of the relationships you have built.”
BNI has seen an increase in Plumbers networking and using social media to help increase their business. Interestingly those plumbers that have seized the nettle have doubled their business. Plumbers recently interviewed have put the increase down to training both themselves and also taking advantage of the training provided by BNI.
Training at BNI consists of interactive workshops aimed at different aspects of the business. They help Plumbers and other members present their business, improve their effectiveness as communicators – e.g. walking into a room full of strangers or simply getting your fellow members to bring you more business.
Mark Ockenden from Heat-Tech Plumbers says:
“Since joining BNI I have had great success in obtaining business and also had learned a lot by attending the various training courses arranged for us”.
Successful networking involves an active ongoing commitment. Join a local group that’s close to your business, so you can easily attend regular meetings and build strong relationships with other business people in the area.
You can visit any BNI meeting, anytime:  www.bni.eu/uk
[author image=”https://www.installeronline.co.uk/wp-content/uploads/2012/11/charlielawson_t.jpg” ]Charlie Lawson is the national director of BNI (Business Network International) which is the  one of UK’s largest business networking and referral organisation. As a widely recognised expert on the power of ‘word of mouth’ marketing Charlie is a public speaker, trainer and author on the subject. Word of mouth referrals accounted for £269 million worth of business passed between BNI members in 2011 – more than 80 per cent of which are B2B SMEs. Charlie’s goal is to help BNI members generate £1 billion of referral business per year by 2020[/author]