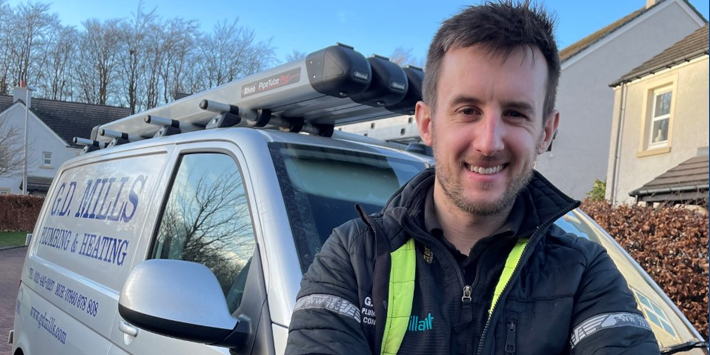 Plumbing and Heating engineer Ryan Mills from Edinburgh has found himself recognised as a surprise Instagram influencer.

In a social media world dominated by celebrities such as The Rock (255 million), Ariana Grande (253 million) and Kylie Jenner (250 million), Ryan is working as a local plumber, fitting and repairing boilers, with his content being surprisingly captivating to his followers.

Plumbing and Heating may not be the first industry that comes to mind for Instagram fame, however, Ryan’s feed has attracted over 8,000 followers and continues to rise rapidly. And product placement from firms that want him to promote their products are coming thick and fast.

According to industry body the Scotland and Northern Ireland Plumbing Employers’ Federation (SNIPEF), the engaging tech-smart young innovator is showing other professionals in the sector how they can raise their profile and boost their income by engaging with social media audiences.

Ryan, who is unique as a plumbing influencer in Scotland and is one of only a handful in the UK, began as an apprentice after leaving Beeslack High School in Penicuik, Midlothian. He is the fourth generation of plumbers in his family and he currently works for his father’s firm, GD Mills Plumbing and Heating, and first created his Instagram account just three years ago.

Since then, he has created 532 posts ranging from how-to videos, tool talks, project explanations and product recommendations which have brought him to the attention of big sector names such as Wilo, Conex Bänninger and Rothenberger.

Between jobs, and sitting in his van for a well-earned break, Ryan explained how his rise to influencer status began.

“When I left school,” he said, “my father handed me a bag of tools and told me I was starting tomorrow. I completed my apprenticeship in three and a half years and have worked with my dad ever since.

“Twitter was my introduction, six years ago, to the potential and the opportunities of social media. Using the hashtag Vaillant, for instance, got me credits to use against items such as workwear. My posts, which were simply showing what I was up to on a day-to-day basis, started to attract the attention of other engineers and manufacturers.

“It soon made sense to me that to grow on social media you need to cover most platforms out there. I have a Facebook. page but that’s used mainly for promoting the business rather than me and the business. Instagram works best for me and I find myself on it daily.

“Recently I’ve moved over to LinkedIn and TikTok which I’m feeling a bit old for to be honest. I’ll soon get the hang of it though.”

Ryan said Instagram, on which he is one of 500,000 active influencers, is by far the most successful account, with a potential advertising reach of 1.16 billion users. And the benefits for influencers are huge.

“I’m very fortunate that tool, fittings and workwear companies along with many others are happy to send me products to try and use. All allowing themselves to be promoted while promoting me at the same time.

“I’ve been taken to Germany on several occasions which has been superb. Especially the trip to Oktoberfest a few years ago with Wilo. It can be a hard balance though while carrying out your normal work but also creating content at the same time.”

Fiona Hodgson, Chief Executive of SNIPEF, said: “Ryan is showing a different and appealing way for plumbing professionals to benefit from having an online following. Influencers are viewed by their followers as trustworthy experts in their field, and they can effectively impact their audience’s purchasing decisions.

“Influencer marketing has grown from $1.7 billion in 2016 to a projected $15 billion this year, demonstrating reaching people this way is here to stay.

“Plumbing firms having at a minimum a social media page, can work to develop partnerships. It is another way of being recognised for their expertise and demonstrates that further work can be gained through it.”

Ryan added: “It is just me and my dad in the firm, and I sometimes find myself replacing boilers that he installed 30 years ago. However, it can be a lonely place at times and I very much enjoy the chance to engage with other engineers, exchange tips and learn from their experiences. Social media enables me to have that opportunity.

“I hope my son will become the fifth generation in the family to go into the industry and I wonder what changes and challenges he will have to encounter in his career.”

SNIPEF has been at the forefront of advice and support for companies to ensure a vibrant and dynamic industry staffed by professionals versed in the complexity of new technologies.