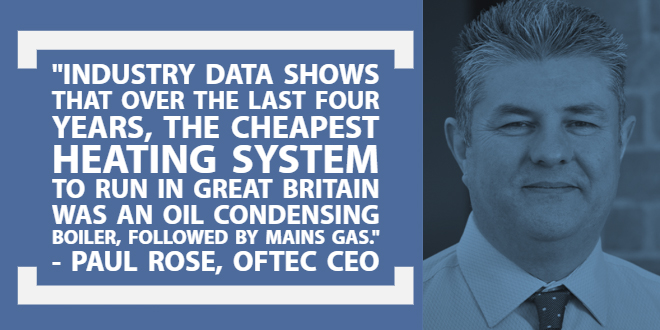 Posted by: jsharpe on October 9, 2019 in Articles Leave a comment

OFTEC has submitted a strong response to Government’s recent Fuel Poverty Strategy for England consultation, outlining how fuel poor households should not be denied the opportunity to benefit from the cheapest heating systems to install and run.

The consultation, launched in July by the Department for Business, Energy and Industrial Strategy (BEIS), invited comments on proposals to update the 2015 fuel poverty strategy.

OFTEC’s submission focused on the importance of using cost effectiveness as the main metric to determine policy otherwise fuel poor households could be forced to rely on heating systems with higher than necessary installation and running costs.

Industry data shows that over the last four years (July 2015 – July 2019), the cheapest heating system to run in Great Britain was an oil condensing boiler, followed by mains gas. They are also cheaper to install or replace than any alternative heating system, so retaining them within the fuel poverty strategy would enable government to support more households within the same overall budget.

Keeping costs low is important for all consumers but particularly so for those off-grid households who are living in some of the least energy efficient properties in the UK. Almost half (46%) of oil using homes in England were built pre-1919, while 51% are detached. This largely explains why 97% fall into the lowest EPC bands D- G and the 50% higher fuel poverty gap (the amount of money each year required to come out of fuel poverty) experienced by rural households.

It is crucial that costs for the fuel poor are kept as low as possible so in terms of addressing fuel poverty alone, oil heating – for now – should remain an option for vulnerable off-grid households.

Traditional heating technologies such as boilers can produce heat at higher temperatures efficiently, so are less sensitive to the thermal efficiency of buildings than systems designed for low temperature heating, such as heat pumps. Therefore, given the poor energy efficiency of most oil using homes, continuing to allow boiler based systems will ‘lower the bar’ for insulation requirements, making it possible to cost-effectively improve even hard to treat properties.

OFTEC recognises that fuel poverty policy cannot be designed in isolation and must also align with other key government priorities, including decarbonisation and clean growth.

However, OFTEC strongly disagrees with the consultation statement: ‘It would be short sighted for the revised fuel poverty strategy to support, for example, the installation of heating oil when the Government has committed to net zero carbon emissions by 2050’.

We must ensure that the revised fuel poverty strategy reflects actual government policy and does not second guess decisions which haven’t yet been made.

BEIS is still evaluating heat decarbonisation policies, specifically for off-gas grid homes, so it would be premature to pre-judge the outcome and exclude oil heating from fuel poverty strategies at this stage. Indeed, excluding oil or gas risks sending out a damaging message, undermining industry confidence and the work underway to develop low carbon solutions.

OFTEC fully supports government’s commitment to move away from fossil fuels but believes the focus should now be on reducing emissions from fuels rather than changing appliances.

Industry is working to introduce a low carbon liquid biofuel to replace kerosene, enabling consumers to migrate easily and cheaply to a 100% liquid biofuel by 2040 – ten years ahead of the Government’s 2050 target. Research commissioned by OFTEC endorses this aim, suggesting that when combined with a range of energy efficiency measures biofuels not only offer the cheapest decarbonisation solution for oil heated homes, but could also achieve the greatest reduction in emissions.

We need to prevent the situation where fuel poor homes have to replace working oil boilers with more expensive alternative technologies when these existing systems can relatively cheaply and easily be futureproofed to run on a low carbon liquid fuel.

BEIS has been fully briefed and is supportive of industry’s work to develop a biofuel, while the Renewable Energy Association, has also advocated this approach in its newly published bioenergy strategy.

At this critical point in the UK’s climate change journey, all decarbonisation solutions must be taken into consideration, especially for the hard to treat off-grid heating sector which presents a particularly difficult challenge. By getting ahead of confirmed policy at this stage, the fuel poor could suffer the unintended yet detrimental consequences.

OFTEC urges industry to clamp down on fraudulently using logos

Heating engineers have their say about the future of the industry