Fan convectors are an underused alternative to rads and UFH

Home » Fan convectors are an underused alternative to rads and UFH 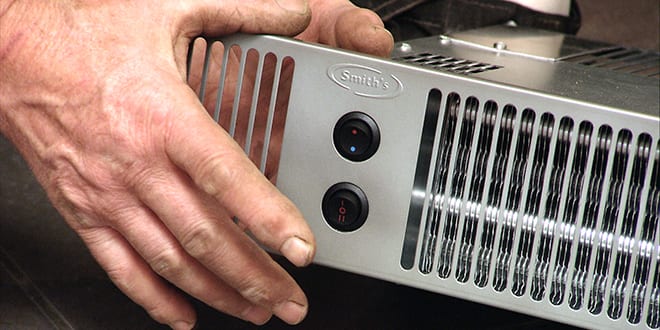 The increased popularity of air source heat pumps has raised issues concerning the best emitters with which to integrate them. Jim Bennett from Smith’s Fan Convectors advocates the fan convector as an effective but underused alternative to both radiators and UFH. 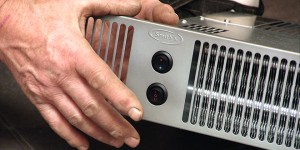 When installing an air source heat pump (ASHP), the chances are that it is either for an off-gas property or for an end-user who’s interested in renewable technology. Either way, the customer will definitely be keen to achieve the maximum efficiency from their new appliance and will be looking to the installer for the right advice.
So far in the UK, many heat pump installations have followed a different approach to the one generally followed in Europe: underfloor heating for newbuild projects, with over-sized radiators for retrofit projects.
However these are not the only options – fan convectors compare extremely favourably to both radiators and UFH in many ways.
By design, heat pumps work optimally at low temperatures – typically around 40°C – and so do fan convectors. Radiators, however, do not effectively convect heat when the water running through them is at 45°C or lower.
To compensate, radiators are usually specified at much larger sizes than when working with a boiler, but this invariably means they take up a huge area of wall, restricting the placement of furniture and the customer’s furnishing options. Additionally, a standard radiator is typically much slower to heat up, is less responsive especially at lower temperatures, and loses around 10% of its heat to the wall it is installed on.
Efficiency alert
Furthermore, using a radiator of any size with a heat pump usually reduces the heat pump’s efficiency by up to 10%. The coefficient of performance (COP) of a heat pump is affected by the difference between the sink temperature (the temperature of the circulated water within the property) and the source temperature. When quoting COP, manufacturers use ‘standard’ temperatures of 7°C outdoor air temperature and 35°C water system temperature.
However, the smaller the temperature difference between the heat source and the heat sink, the higher the energy efficiency of the heat pump will be.
Heat pumps have low COPs when used with conventional hydronic heating systems with high circulation temperatures of 60°C or higher. By trying to increase the water temperature from a heat pump beyond the optimum, the compressor will be required to work harder, use more electricity and ultimately reduce the COP.
Sample SAP calculations show shows that using an air source heat pump together with fan convectors in a new-build should deliver around a 12% reduction in running costs and carbon usage when compared with an air source pump paired with radiators. By using fan convectors, the efficiencies achieved are also close to those gained by installing underfloor heating.
However, UFH has its drawbacks in installation cost and time, slow heating and cool-down times, and use in upstairs rooms. It also lessens customer flooring choice as carpets reduce the efficiency of heat transfer. 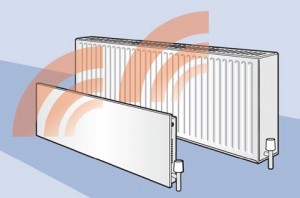 How do fan convectors work?
Using forced-air convection, via a small energy-efficient electric fan, fan convectors (also known as fan coils) circulate the heat generated by the heat pump quickly into the living space, providing almost instantaneous heat. When the room temperature reaches the set temperature, the fan convector will switch off. Once the room drops below the set temperature, it will switch itself back on.
While those who know and appreciate how fan convectors work use them repeatedly for projects where they are a better option than radiators, there is still some confusion about fan convectors among both installers and specifiers – not least because of the integral electric motor.
The motor is used to circulate, rather than generate, the warm air. The fan convector contains a heat exchanger through which the hot water flows, meaning that the fan convector is hydronic – just like a radiator – and is installed in exactly the same way, but with the addition of an electrical connection.
The major difference is that a fan convector uses just 5% of the water content of an equivalent output radiator. Fan convectors are consequently much more responsive to changing weather patterns, and, because of their small, energy-efficient fans, can circulate heat almost instantaneously. They do not need to be large to be able to perform economically, and they can also be controlled in much tighter parameters and far more easily than by a TRV on a radiator.
Fan convectors also have considerable siting benefits. Unlike radiators, they do not need to be positioned under the window for reasons of convectionso they can be added to the heating system anywhere in the room depending on the project and needs of the building. There is even a model that fits neatly under a kitchen base unit yet still joins to the system.
Supporting research and testing
There have been some convincing independent tests to show that the installation of heat pumps is a situation where fan convectors should be preferred over radiators in retrofit scenarios and used to complement underfloor heating in new-build projects.
In addition, The MCS 021 heat emitter guide states that heat pumps will perform at an optimum if used with lowtemperature heat emitters: ‘A fanassisted radiator (fan convector) will have a higher heat output than a standard radiator the same size. You can therefore achieve a higher Temperature Star Rating without the heat emitter becoming too large for a room with a fixed specific heat loss.’
With their conventional size, easy installation and good performance, fan convectors definitely make a great partner to ASHPs. The domestic models are slim and comparable in appearance with many low temperature radiators, and they can even be painted to match décor with no adverse effect on performance.
Suggesting a move away from radiators is quite a leap of faith for property owners, particularly if they are used to radiators or have their sights set on UFH. However, any forward-thinking customer who has already taken the considerable step of selecting an ASHP will be open to new suggestions from a knowledgeable professional installer.
From the considerable efficiencies and good response times to flexible siting options and ease of installation, fan convectors definitely have strong credentials for all concerned.