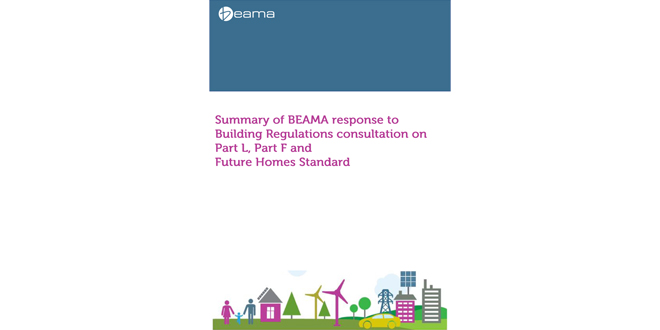 Posted by: jsharpe on February 10, 2020 in Industry News Leave a comment

Recent comments from MHCLG Ministers suggest that the proposals for 2025 Building Regulations may go beyond levels suggested in the Future Homes Standard consultation that closes today. Coupled with other measures, the consultation proposals for 2020 can be a useful stepping stone to more ambitious Regulations planned for 2025. In its response, trade association BEAMA supports the ambition to reduce carbon emissions from new homes by over 30% in the 2020 Regs. However, comments from the Secretary of State that new homes should be zero carbon as standard in 2025 chime with BEAMA’s view that there should be rewards for developers who go beyond the Government’s suggested minimum of 75% improvement in 2025, compared to 2013 standards. Questions will be raised about the seriousness of Government’s ambitions if they row back from their stated preference in the consultation, but it is now easy to see a scenario where pressure grows before 2025 such that the ‘Future Homes Standard’ will require fully zero carbon emission homes.

However, there will be a worrying gap in the shorter term if Government confirms, as seems very likely, its plans to scrap the Compliance Guide. While industry has always interpreted and clarified Building Regulations for the benefit of installers in the form of guidance documents, it is hard to see how guidance from BEAMA and others will carry the same weight as the Compliance Guide. Essentially Government logos on a document make all the difference in its contents being followed. The absence of the Compliance Guide, and the only partial transfer of its contents into the Approved Documents, will mean that installers have a muddier view of compliance and consequently householders’ heating and ventilation systems will operate less efficiently. While proposals such as those to lower flow temperatures in heating systems are very welcome, implementation will suffer without suitable trusted guidance and instruction.

There should be an exciting future for new homes, as products already on the market see growth in deployment and improvements in the way they are used as systems. Much work remains to secure Regulations that eke every bit of potential from products, and we must see improvements in indoor air quality, heating system design and flexibility offerings. Yet BEAMA members already supply the technologies that can lead us to net-zero, and we look optimistically to the next ten years as the start of better experiences for householders in the short and long term.

We have released a summary version of our response here.