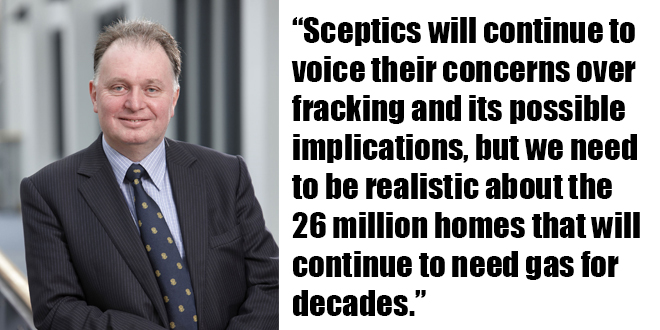 Posted by: jsharpe on October 13, 2016 in Industry News Leave a comment

The UK’s dependency on gas to heat its homes makes properly regulated fracking one of the most logical choices for the future of its gas supply, according to a spokesperson for the country’s leading boiler manufacturer.

Neil Schofield, Head of Government and External Affairs at Worcester, Bosch Group, believes last week’s decision to allow hydraulic fracturing for shale gas in Lancashire has the potential to stabilise the country’s fuel demand for the long-term.

“The reality of the UK’s energy infrastructure is such that over 85% of our homes rely on gas to provide heating and hot water, and this isn’t going to change any time soon,” Neil commented. “Through policies such as the Green Deal and Renewable Heat Incentive, the Government has tried and failed to encourage mass uptake of renewable technologies, leaving us needing to make the best of what we have – which, in this case, is a hugely successful and accessible gas infrastructure. With this in mind, the decision to explore the viability of fracking has to be seen as a very sensible choice.

“Our growing dependence on imported gas in recent years has been well documented, and leaves us in a vulnerable position both economically and ecologically. As long as it’s well-regulated, the use of shale gas has the potential to secure our own energy provision while reducing the carbon emissions associated with import.

“A look across the Atlantic allows us to see the way shale gas can boost both energy security and the economy. As recently as 2008, the cost of natural gas was $8 a unit, whereas it now stands at around $3, which has made a huge difference to the stability of the supply.

“Sceptics will continue to voice their concerns over fracking and its possible implications, but we need to be realistic about the 26 million homes that will continue to need gas for decades. For the time being at least, fully regulated, safe and commercially viable fracking may well be the best option.”

For more information on Worcester, Bosch Group and its range of high-efficiency heating and hot water technologies, visit www.worcester-bosch.co.uk.