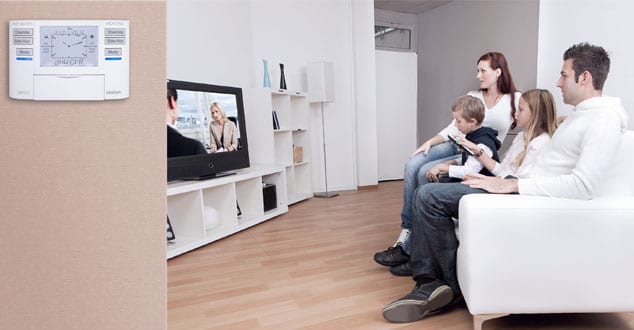 Grässlin products are to be found in most UK homes but, until recently, mainly with boiler manufacturers’ branding. As the company introduces more products under its own name, Bryan Gates of Grässlin UK highlights current developments within the heating controls sector.
The advent of wireless controls has been a notable feature of the heating controls sector in recent years and has led to a divergence in the market.  Hard-wired products are still very popular because there’s a massive installed base of wired systems in UK homes. If you’re in an established property with a set of hard-wired controls and your programmer becomes faulty, why would you want to introduce wireless controls? And, with new build homes, there’s always an electrician involved at some point, so the planned installation of a wall plate during the build process should not pose a problem.
Conversely, wireless products are particularly attractive for refurbishments, and also, depending on the timing of the fitting-out, for new build because fitting wireless controls retrospectively causes less disruption.
New technology reliability
To date, wireless products have been widely accepted in the UK market, and ‘mesh networking’ protocols enable wireless exchange of data. These days, modern wireless protocols and coding systems, where individual system components have the ability to act as relays, have overcome most of the reliability issues that affected earlier ‘point-to-point’ systems.
Warm reception for controls
People are paying more attention than ever before to controlling their heating. The average annual energy bill is now over £1,400, and heating represents around half of this. So installers offering their customers a better class of energy controls are likely to get a warm reception.
Both customer demand and legislation, especially Part L of the Building regulations, are driving the quest for improved heating efficiency – not just through more efficient boilers but also by combining boilers with controls that are able to provide direct feedback.
There are two particular areas where controls are becoming more sophisticated. One is weather compensation, using an exterior temperature sensor. The system and its controls select a flow temperature based not on the temperature in a room but on the sensed external temperature.
In a parallel development, room compensation enables modulation of the output of the heating appliance – where a suitable boiler and matched controls enable this. Therefore, instead of simply switching the boiler on fully or off, the boiler can now be enabled to operate at perhaps 25% of its potential because that more closely matches the heat loss from the building.
Legislative requirements relating to construction are becoming ever more stringent.  By 2016, new build properties must, in essence, be neutral in their carbon output. This is to be achieved by having renewable systems, such as solar thermal or solar photovoltaic, integrated with conventional heating systems. Therefore the energy consumption and generation – at a microgeneration level – would be in balance.
For controls manufacturers, this means that the technologies built into controls and heating appliances have to get better. For example, there is likely to be a greater degree of data exchange between a controller and the heating appliance.  Another probable development is the advent of networks of controls, where there is a time-based main controller and subsidiary temperature controllers, plus the heating appliance, which together form a network – something well suited to wireless systems. The objective is to deliver the optimum temperature, at the right time, with the lowest carbon output.
As is the case with many consumer products, reliability, functionality and attractive design are now looked for in controls – by both householders and installers. We’ve spoken to many installers and the time taken to complete an installation has become a big part of the overall job. They also want a ‘fit and forget’ solution: something that can be installed quickly, and left with the end user, confident that they will be able to use it. The first person householders call when they can’t use the programmer is the installer. Do installers really want to be making calls out to customers who simply cannot programme a controller? 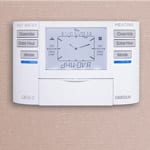