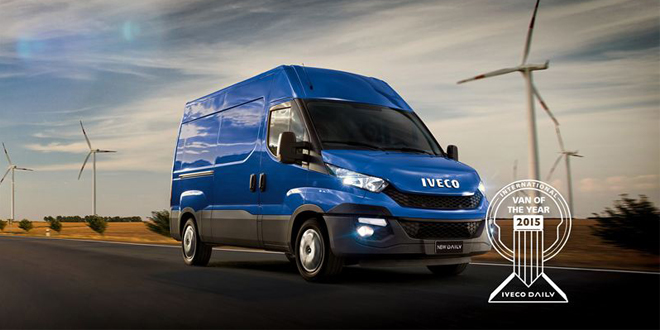 Posted by: Installer Online on September 25, 2014 in Vehicles Leave a comment This follows September’s launch of the all-new Iveco Daily onto the UK market – this week voted International Van of the Year 2015 by leading road testers from 23 countries in Europe and Russia.

The most fiercely-contested award in the European light commercial vehicle sector, New Daily saw off challenges from 11 other new van models to take the 2015 title – widely regarded as the toughest competition since International Van of the Year was established in 1991.

Chairman of the judging panel, Jarlath Sweeney, praised Iveco for designing “an excellent range”, which was launched following investment of $700 million in research and development.

Claudio Zanframundo, Managing Director of Iveco, said: “The ongoing economic recovery in the UK means businesses are reinvesting in their fleets, but being ever-mindful of the need to choose the most competitive vehicles in their class. Total cost of ownership, and in particular fuel efficiency and payload capacity, have never been under such close scrutinisation.

“We’ve redesigned New Daily from the ground-up to deliver greater efficiency for businesses in all areas. As a result, we’re confident in its ability to contribute to a customer’s bottom line and fast become a hard-working and hugely important fleet asset.”

New Daily is available at gross vehicle weights from 3.5 tonnes to a class-leading 7.0 tonnes, with nine power outputs from 106 to 205hp and load space volumes for van models from 7.3 to 19.6m3– making it the largest capacity panel van on the market.