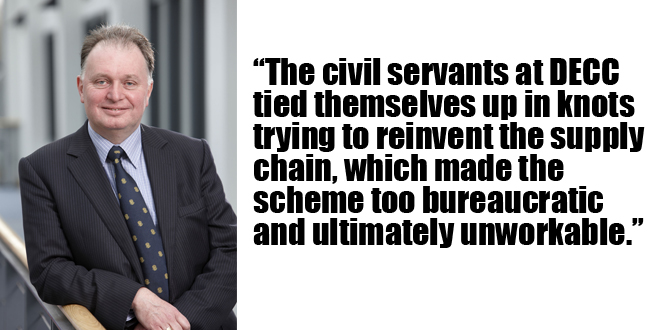 Posted by: jsharpe on July 25, 2016 in Industry News Leave a comment

Lessons must be learned after failure of ‘abysmal’ Green Deal

The verdict on the Green Deal is in, with MPs describing the scheme as ‘abysmal’, overly complex and requiring excessive paperwork.

The highly critical report has been welcomed by the UK’s leading boiler manufacturer, whose Head of Government Affairs says ‘lessons must be learned’.

Neil Schofield, Head of External Affairs at Worcester, Bosch Group, commented: “The verdict of the Public Accounts Committee is damning. Like many others, I was there from the outset, trying to make the scheme workable, but the civil servants at DECC tied themselves up in knots trying to reinvent the supply chain, which made the scheme too bureaucratic and ultimately unworkable.”

He continued: “In trying to ‘gold plate’ every single aspect of the scheme they failed to understand the dynamics of the heating supply chain and the central role that installers play in the consumer decision-making process.”

The Green Deal was wound-up in 2015 having delivered only £50 million of loans despite an initial projection by DECC of a £1.1 billion uptake, that the Public Accounts Committee has subsequently described, in the report, as ‘wildly optimistic.’

Neil points towards the requirement for the UK’s installer base to be PAS 2030 accredited as a good example of why heating engineers failed to embrace the scheme.

“Installers are already Gas Safe Registered and install 1.5 million boilers each year with the highest standards of professionalism and integrity. The requirement to get PAS 2030 accreditation – which only 3% of UK installers currently have – was unnecessary, bureaucratic and eventually self-defeating, because the UK’s installer base ultimately shunned it.”

Neil says lessons can be drawn from the failure of the scheme. “My concern now is that the failure of the Green Deal will be brushed under the carpet and that lessons won’t be learned. The Bonfield Review, which the heating industry is potentially going to be pulled into, is another exercise in bureaucracy and regulation that the industry does not need or deserve.”

He concluded: “I welcome this report and only wish the heating industry had been listened to from the outset, because we could have played a central role in making Green Deal work. Instead, we were marginalised and our recommendations went unheeded. There are clear lessons that can be drawn from Green Deal, this situation must not be allowed to happen again.”

For more information on Worcester, Bosch Group, and its leading range of heating and hot water technologies, visit www.worcester-bosch.co.uk.