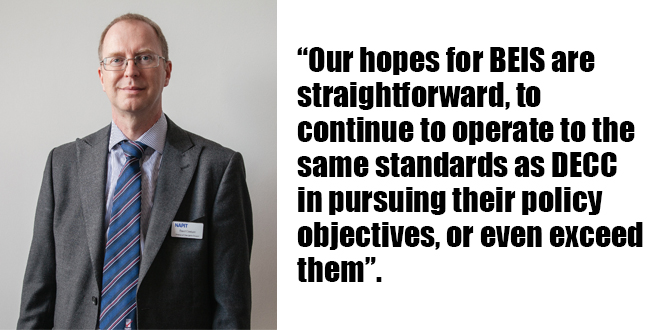 Posted by: jsharpe on August 15, 2016 in Industry News Leave a comment

Managing Director of NAPIT Certification David Cowburn discusses how the recent restructure of the Department of Energy & Climate (DECC) could affect the energy efficiency and renewable’s industry and beyond.

Of the recent whirlwind of activity across Westminster throughout the last few months, perhaps one of the most overlooked shifts was the restructure of DECC on the 14th July. In its place, the newly appointed Prime Minister Theresa May’s Government created a new department. The Department for Business, Energy and Industrial Strategy (BEIS) was formed as a merger between DECC and the similarly dissolved Department for Business, Innovation and Skills (BIS).

Since its original formation in 2008, DECC had been the primary Government department tasked with advising and establishing energy policy across the United Kingdom. As such, it had a massive impact on the energy efficiency and renewable energy industries. We often collaborated closely with officials within DECC to influence the design of installer schemes and to make sure that our members views were represented, and will be sure to miss some familiar faces.

However, without a stand along DECC, many of its previous responsibilities that we have key interests in will now be inherited by BEIS. These include major long term goals within and Energy and Industrial Strategy, such as reaching the national goal of reducing carbon emissions by 80% by 2050. Equally, BEIS is also committed to finding ways of reducing energy bills for hard working families and businesses; which we hope will mean the continuation of key policy’s such as the Energy Company Obligation (ECO), the Renewable Heat Incentive (RHI) and the Feed in Tariff (FiT) and also result in an attractive new policy to encourage the able to pay sector to install cost effective energy efficiency measures.

Our hopes for BEIS are straightforward, to continue to operate to the same standards as DECC in pursuing their policy objectives, or even exceed them. We are determined to monitor the department’s activities and make sure that it does not lose focus on the key areas that concern our members and to learn from previous mistakes, such as over complication of schemes.

Based on the ministerial appointments made to BEIS, there is however evidence to suggest that the department is in good hands. Greg Clark MP, who has been appointed the Secretary of State for the BEIS, had previously been the Shadow Secretary of State for DECC in its early years between 2008 and 2010. Alongside Greg Clark, a further two ministers who have been appointed to BEIS with energy roles have had previous ministerial experience, albeit not in DECC; Nick Hurd MP Minister of State for Climate Change and Industry and Jesse Norman MP Minister for Industry and Energy. They are joined by Baroness Neville-Rolfe who is Minister of State for Energy and Intellectual Property.

We will continue to engage with BEIS in the same way that we did with DECC. Currently, we are already in dialogue with them over The Energy Company Obligation (ECO), a programme to deliver energy efficiency measures in homes across Great Britain in order to reduce carbon emissions and improve the ability of low income and vulnerable consumers to heat their homes to comfortable levels. We are also awaiting feedback on a recent consultation on the Renewable Heat Incentive (RHI), which was introduced to support households, businesses, public bodies and charities in transitioning from conventional forms of heating to renewable alternatives.

So whilst some may regard the restructure of DECC and the formation of BEIS as a step backwards for the climate change agenda I think if BEIS does what it has set out to do and aligns the department for business, industrial strategy and the science base with the department responsible for energy and climate change policy, it could mean this Government will be best placed to deliver the significant new investment and innovation needed to support the UK’s future energy policy. But for now, we will have to wait and see.

How to correctly size a heat pump

Watch: Installers discuss the Impact of COVID-19 on the plumbing and heating sector