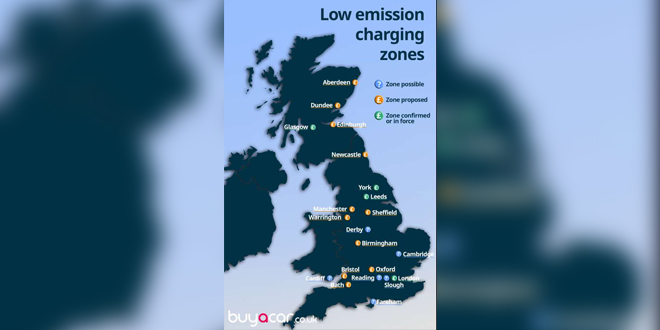 One in three motorists admit they don’t know if their current diesel car meets the emissions standards that avoid anti-pollution charges being rolled out across British cities.

But even though most cars sold since 2015 aren’t affected by existing and imminent ‘ultra low emission zone’ (ULEZ) penalties, worried drivers are still in the dark about the impact on their pockets.

It means the race to ditch diesel and switch into petrol or hybrid models is continuing, even in many cases where diesel remains the most cost effective motoring option for many owners.

Analysts for the online motor retail specialist BuyaCar.co.uk found that more than one in three drivers admitted to not knowing if their car meets the all-important ‘Euro 6’ emissions standard.

That is the benchmark determining whether a car falls foul of new clean air penalty charges or not. But, whether or not they know if their car fits the bill, a majority of diesel owners are still planning to switch to a different fuel type and citing anti-pollution penalties as one of their reasons.

A clear majority of the 613 drivers questioned had cars under three years old – meaning they would be unaffected by charges such as the £12.50 daily penalty in the London ULEZ, introduced three months ago.

But asked whether they knew if their cars would be charged for driving into a ULEZ or not, 41% said they had no idea. And 37% did not know if their car meets the current Euro 6 emissions standard that exempts them from such charges.

Motorists’ confusion over the most cost effective fuel type was further highlighted by the finding that 67% of those planning to change their car placed fuel economy at the top of their list of priorities. This means many drivers are abandoning the fuel efficiency of diesel for fear of anti-pollution charges that would not affect them.

Austin Collins, Managing Director of BuyaCar.co.uk, said: “Our findings suggest that many motorists are hopelessly confused about the impact of ultra low emission zone charges on them and are often unnecessarily switching away from diesel even when it remains the best option for them.

“Our research has consistently revealed worries among diesel drivers about the prospect of being penalised for entering cities now and in the future, as ultra low emission zones are rolled out across the country. But this is the first time we have found such a clear gap between their fears and reality.

“While it is true that most diesel cars on the roads will be affected by the charges announced or proposed in more than 20 cities up and down the UK, our research focused on people whose cars would not be affected.

“But we found that a sizeable minority of drivers have no understanding of the emissions standards that their existing cars meet and many of those people are planning to switch away from diesel without knowing whether or not the new clean air zones will pose a problem for them or not.

“We suspect that what we are seeing is the lingering aftermath of the ‘dieselgate’ scandal, in which official fuel consumption testing figures were falsified, and that many otherwise satisfied drivers of diesel cars have lost confidence that the cars are as economical as they once believed.

“The accelerating move to introduce anti-pollution penalties up and down the country has only added to their discomfort and many drivers are taking a ‘better safe than sorry’ approach to choosing their next cars – even if that could cost them more overall and see them switching to a less suitable car.”