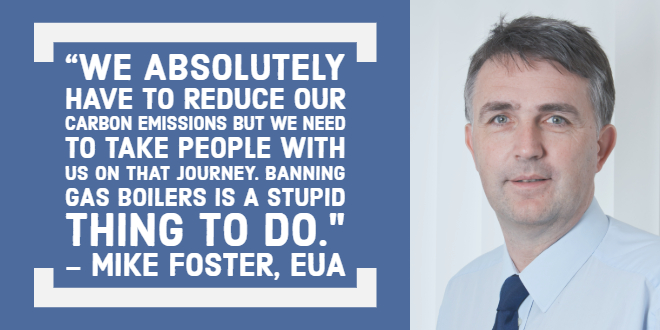 Former Government Minister Mike Foster has slammed the Committee on Climate Change for “living on another planet, not trying to save the one we have”.

Mr Foster, who now works for the not-for-profit body the Energy and Utilities Alliance EUA), issued his response to the CCC’s latest report on low carbon heating, which suggests banning gas boilers in new-build UK homes by 2025.

He took a deliberate swipe at the CCC’s Chief Executive Chris Stark, for what he describes as “rank hypocrisy” in advocating other people can’t have a gas boiler while he continues to do so.

Mr Foster, who voted for the Climate Change Act and as International Development Minister worked to protect the world’s poorest communities who are vulnerable to climate change, said:

“The authors of this report are living on another planet when they should be giving realistic options on how to save this one. Some of the suggestions simply don’t reflect how people actually live in their homes.

“We absolutely have to reduce our carbon emissions but we need to take people with us on that journey. Banning gas boilers is a stupid thing to do. We need to change the type of gas to a low carbon version, such as biomethane or hydrogen. The focus should be on future proofing homes not banning something prematurely. So gas grid connections, using biomethane or hydrogen should still be part of the mix, not banned.

“That way we keep the convenience and affordability of a gas boiler without the carbon. Instead it seems, the Committee listen to their friends from the heat pump industry and plug their appliances instead. Ironically, that means using electricity generated in gas-fired power stations. I have to question why the Committee are so keen on fitting heat pumps when so many other, more economically viable options exist.

“I have to also make the point, that it is rank hypocrisy for the CEO to be using a gas boiler whilst advocating others can’t. The excuse that it would be difficult and therefore expensive to replace his own boiler is a bit rich; he earns considerably more than average. If he can’t afford to put his money where his mouth is, then how can others be expected to pay?

“And this matters, because if the public start to turn against action on climate change because of the antics of this Committee, then the very poorest and most vulnerable on our planet with suffer the most. For me, that is simply unacceptable.”

Watch: Installers discuss the Impact of COVID-19 on the plumbing and heating sector