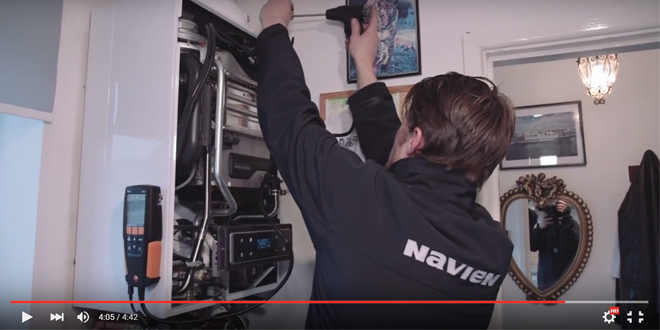 Posted by: jsharpe on November 9, 2015 in Industry News Leave a comment

KOTRA (Korea Trade-Investment Promotion Agency) and KD Navien joint-hosted an event in Portsmouth to present their donation and installation of Navien’s condensing boilers to four British Korean War veterans. The event was captioned ‘You are heroes, and always will be’.

The event was a great success, with the Director-General of KOTRA’s UK and Ireland branch, Yoontae Kim, and the managing director of Navien UK, Matthew Choi, as well as local buyers and press, totalling around 60 people, all in attendance. The event focused on expressing the gratitude of the Korean people towards the war veterans, and on building friendship and success between Korea and the UK, and generated great interest among local people.

During the Korean War (1950-1953), British troops totalling 56,700 soldiers served in Korea. Five thousand of these suffered either casualties or captivity. One of their most famous exploits was when 600 British soldiers faced 30,000 opposition troops at the Imjin River, and these 600 included Sydney Smith, one of the four veterans to whom Navien donated their boilers.

KD Navien’s UK Managing Director Matthew Choi said that he hopes for “prosperity in the partnership between the UK and Korea, two countries with a tradition and history of friendship”, and that “Navien’s top quality energy-efficient products and system will contribute to the lives of the British people, starting with these four heroes.”

KOTRA’s Director-General Yoontae Kim explained: “The Korean people have a lasting gratitude and warm heart towards the UK, and today’s event was both moving and heartfelt. Despite being a small gesture, we hope the warmth these boilers bring will show this warm heart.”

Navien boilers are a hit at InstallerSCOTLAND