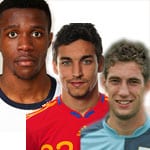 Welcome to the Scouting Report – the section of InstallerLEAGUE where we run the rule over who’s performing and who’s not to try and help you identify the players that could win (or lose) you the league trophy, a home entertainment system or tickets to the FA Cup Final.
To kick off, we’ll be taking a look at the players who have arrived for a new start on our fair shores. With the big names like Falcao and Cavani shunning the Prem, will the likes of Bony, Schurrle and Jesus Navas fill the gap?
GK – Maarten Stekelenburg
After five seasons (and 172 league appearances), replacing Mark Schwarzer at Fulham might seem like a tough ask – but if anyone can do it, it’s probably Maarten Stekelenburg. A keeper with a big reputation), Stekelenburg could be a snip at £5million as Schwarzer has averaged over 135 points a season during his time at Fulham.
MF – Jesus Navas
One of the standout players in Spain’s current crop, Navas joins David Silva at man City for the new season. £9million might seem like a lot for a player who scored only one goal last season, but City’s opening three games against Newcastle (H), Cardiff (A) and Hull (H) should ensure he gets off to a flyer.
MF – Wilfried Zaha
Will the burden of being SAF’s last signing be too much for the ‘next big thing’ in English football? There’s obviously no guarantee that he will even break into the United first team when you consider the calibre of players in the squad – but at only £6.5million, he might just be worth taking a risk on.
MF – Andre Schurrle
When Chelsea splash in the region of £20million on a player, you assume that he’s going to be good. Schurrle might not be a household name over here, but 38 goals in four Bundesliga seasons suggest that he could bring in a lot of points – assuming he can get a space in a top-notch midfield.
CF – Wilfried Bony
Can an out-and-out centre forward click with a team that seemingly appears to thrive without a traditional ‘number 9’? Bony’s goal record last season – 30 in 31 for Vitesse Arnhem – would suggest that he could prosper anywhere. The real issue could be whether his arrival has a detrimental impact on last season’s star player – Michu.
CLICK HERE TO CHOOSE YOUR TEAM TODAY!