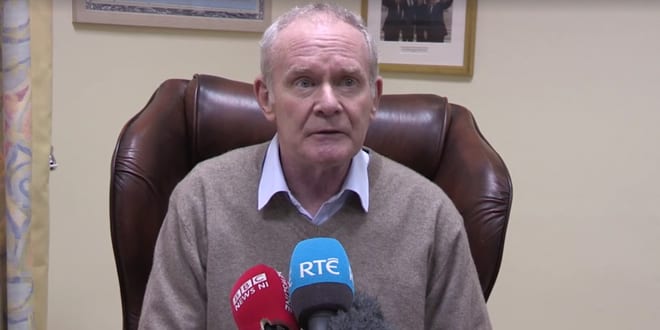 Martin McGuinness has stepped down as Northern Ireland’s deputy First Minister in protest over a scandal involving the Renewable Heat Incentive (RHI) – which could cost the taxpayer £490million.
There have been serious problems with the RHI in Northern Ireland, with a whistleblower telling the Northern Ireland Executive that the scheme was being abused.
One claim was of a farmer who was due to make £1million over 20 years for heating an empty shed.
The RHI was set up in November 2012 by the Department of Enterprise, Trade and Investment (DETI), and Arlene Foster was DETI Minister at the time.
Now Foster is First Minister in Northern Ireland, and joint head of the Northern Ireland Executive, alongside the deputy First Minister.
Foster’s refusal to resign over the failings of the RHI which she helped set up, is one of the reasons why McGuinness has left his post, claiming in his resignation letter:
“It is my firm view that the DUP’s (Democratic Unionist Party) handling of this issue has been completely out of step with a public mood which is rightly outraged at the squandering of public money and the allegations of misconduct and corruption. The public are demanding robust action and accountability but the DUP, in particular its leader Arlene Foster, have refused to accept this.

“The DUP leader has a clear conflict of interest. She was the minister responsible for the RHI scheme at its inception. No cost controls were put in place and warnings were ignored. This has led to an enormously damaging pressure on our public finances and a crisis of confidence in the political institutions.
“The minister responsible for the RHI scheme should have no role in overseeing how this will be rectified.
“There are significant conflict of interest issues and I have urged Arlene Foster to stand aside without prejudice to ensure confidence in the necessary investigation and in the wider public interest.
“The First Minister has refused to stand aside, without prejudice, pending a preliminary report from an investigation.
“That position is not credible or tenable.
“Therefore it is with deep regret and reluctance that I am tendering my resignation as deputy First Minister with effect from 5pm on Monday, 9th January, 2017.”
As there can’t be a First Minister without a deputy First Minister, the Northern Ireland Assembly now faces an election.
Read Martin McGuinness’s full resignation letter here: