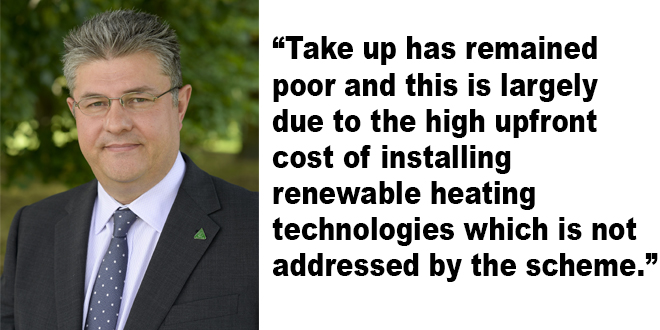 Posted by: jsharpe on March 13, 2018 in Industry News Leave a comment

OFTEC has re-ignited its calls for an overhaul of the domestic Renewable Heat Incentive (RHI) following a recent report from the National Audit Office (NAO) which confirms the scheme ‘has not achieved value for money’.

Published at the end of last month, the ‘Low-carbon heating of homes and businesses and the Renewable Heat Incentive’ report examines progress against the RHI’s key objectives and cost-effectiveness of the scheme, alongside monitoring, evaluation and non-compliance.

The findings validate OFTEC’s long held concerns that take up of the RHI has been ‘much lower than anticipated’ with the scheme delivering just 78,048 new installations in Great Britain (as at December 2017) at a cost of £1.4bn. NAO estimates that at this current rate, the RHI will achieve around 111,000 new installations by March 2021 – just 22% of the original 513,000 target.

The cost effectiveness of the RHI was also described as ‘uncertain’ and ‘likely to be worse than the Department’s estimate’. Furthermore, the report states that the Department for Business, Energy & Industrial Strategy (BEIS) has failed to keep track of sums paid out under the scheme, with overpayments to RHI participants in 2016-17 as a result of non-compliance with the regulations estimated to be as high as £3 million.

Commenting on the report findings, OFTEC CEO Paul Rose said: “NAO’s study underlines the major concerns we have held about the RHI since its launch almost four years ago. Take up has remained poor and this is largely due to the high upfront cost of installing renewable heating technologies which is not addressed by the scheme.

“It’s encouraging that BEIS is consulting on the introduction of ‘assignment of rights’ to help tackle this issue, whereby a third party would pay the installation costs of the technology in return for the RHI payments.

“However, this doesn’t overcome the other major cost hurdle for consumers which is that renewable heating technologies such as air source heat pumps are currently over 40% more expensive to run than a high efficiency oil boiler. So even if installation costs are met, it’s unlikely many homeowners will be able to afford to swap their oil heating systems for one that will result in far higher fuel bills.”

Alongside prohibitive costs, BEIS’ own research has identified further barriers to take up of the RHI, including a lack of public awareness and familiarity with renewable heating technologies, and concern over the significant and expensive improvements required to many properties for heat pumps to operate effectively.

In partnership with leading industry manufacturers, OFTEC will soon begin testing the viability of a synthetic bio-oil called HVO as a potential low carbon liquid replacement for kerosene. If the fuel meets technical and sustainability requirements, OFTEC says bioliquids must be recognised in any future versions of the RHI and financial incentives should be provided to help consumers cover any cost differential in the price of a renewable liquid fuel.

Paul Rose continues: “As an industry we are working hard to find a low carbon solution for the 1.4 million UK households who currently rely on oil heating which will overcome the cost and practical issues associated with the current renewable heating options on the table.

“We are in talks with government officials and policy makers to help them understand these alternative ideas and gain recognition and financial support for our proposals.

“The NAO report makes it clear government is currently ploughing vital resources into a scheme which simply isn’t working. These resources could be far more effectively spent on bringing to market a low carbon liquid fuel which would provide an almost drop in replacement for heating oil, offering a practical, secure and sustainable solution for off-grid homes into the future.”