Posted on September 8, 2014 by Installer Online 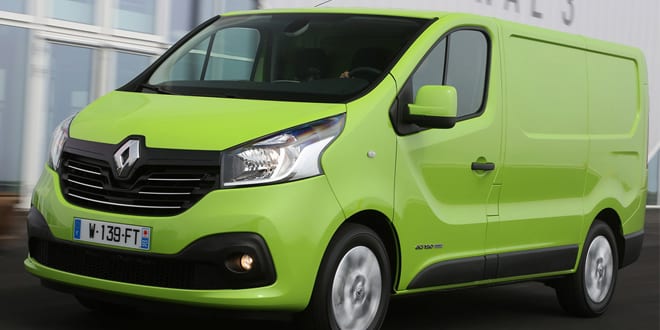 Due to arrive in Renault dealerships in September 2014, the completely re-designed and re-engined Trafic is set to go head-to-head with the Ford Transit Custom and should give the marque’s UK fortunes a welcome boost.
Power comes courtesy of a quartet of 1.6-litre dCi turbodiesels, all married to six-speed manual gearboxes. Under the ENERGY banner two of them — at 120hp and 140hp — feature Stop & Start and twin-turbo technology. The sequential turbocharging — one small, the other large — and twin-cooler arrangement is designed to make them more responsive, especially at low revs, yet at the same time more economical when it comes to fuel consumption.
As an example, van variants fitted with the 120hp twin-turbo are capable of returning up to 47.9mpg according to official combined cycle figures, equating to a CO2 figure of 155g/km.
The single-turbo versions pump out either 90hp or 115hp. Average fuel economy across the range has improved by over five mpg compared with the old Trafic, contends Renault. Fuel economy improvements of up to 10 per cent can be achieved by hitting an ECO button on the dash-mounted gearshift console says Renault. Doing so cuts engine torque and power and alters throttle pedal response.
Service intervals for all engines in the range are two years/25,000 miles. 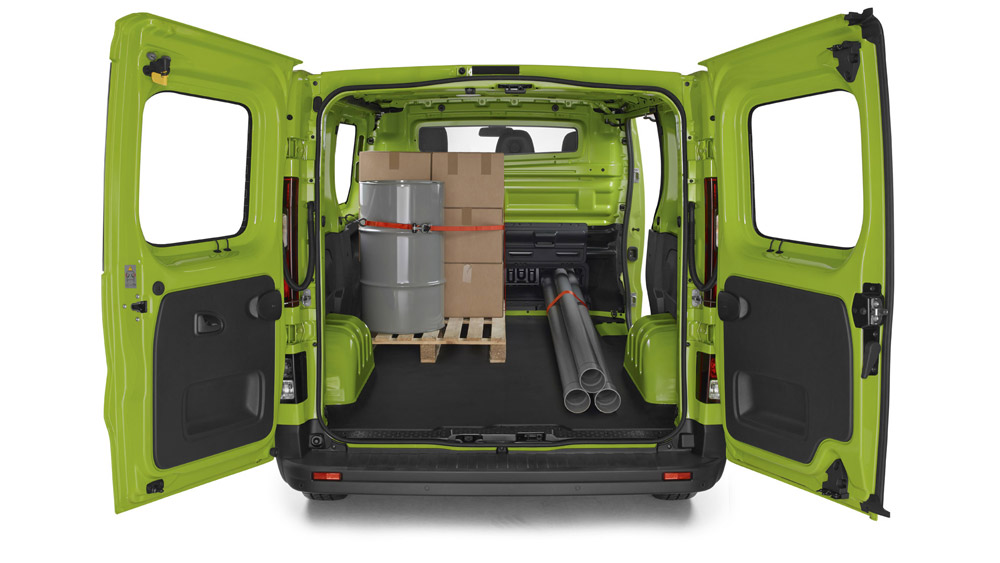 Load Area
With two different heights — the high roof variant will debut in 2015 — and two different body lengths on offer, the latest Trafic is 210mm longer than the departing model and offers more cargo space.
Load cubes range from 5.2m³ (L1H1) to 8.6m³ (L2H2) and a hatch in the bulkhead allows items up to 4,150mm long to be accommodated in the long-wheelbase. Either 16 or 18 load tie-down points are supplied as standard, dependent on model variant.
Load length in the vans from the bulkhead at floor level is 2,537mm (L1) or 2,937mm (L2) with a maximum width of 1,662mm, reducing to 1,268mm between the wheel boxes. Load height is 1,387mm (H1) or 1,898mm (H2) and rear loading height is 552mm across the board.
Access to the load area is via either twin side-hinged rear doors or the nearside sliding door; the latter is fitted as standard across the van range, along with a full steel bulkhead.
Gross payload capacities extend from approaching 1,100kg to nearly 1,250kg according to the version chosen and the latest Trafic is capable of towing a braked trailer grossing at up to 2,000kg. Recognising that many operators will want to utilise that ability, Trafic can be specified with Trailer Swing Assist. If the trailer starts to sway, engine torque is limited and the brakes applied in such a way that the swaying will hopefully be brought under control.
As well as ABS the standard built-in safety system includes Electronic Stability Control, Hill Start Assist, Rollover Prevention and Grip Xtend, a traction control system that helps the newcomer cope better with loose surfaces.
In-Cab Convenience
With some 90 litres of bins and shelves there is no shortage of storage space in the attractively-designed cab with its re-styled fascia. A six-way-adjustable driver’s seat complete with a lumbar support and armrest is standard as is a rake- and reach-adjustable steering wheel.
Three trim levels are up for grabs; Business, Business+ and Sport. The standard entry-level spec includes electric mirrors and windows, remote central locking, Bluetooth and a DAB radio with USB connectivity.
With Business+ adds manual air-conditioning, the aforementioned load-through facility for the bulkhead — extending load length by 1.2m — and rear raring sensors. Also included in the package are a centre passenger seat with a back that folds down to create a desk with a removable A4 clipboard and laptop storage, and dash-mounted mobile phone cradle; there’s one for a tablet on the options list.
A clever feature is the ability to position the large convex mirror on the back of the passenger sun visor to enable the driver to see what is in the van’s nearside blind spot. It’s a feature also found on some of the revised Master line-up.
Move up to top spec Sport trim and it brings with it 17in alloy wheels, metallic paint, cruise control and speed limiter, satellite navigation and a 7in colour touch screen.
With safety in mind, Trafic can be ordered with a tyre pressure monitoring system and a rear view camera as extra-cost options. Another option is an internal rack suspended beneath the load area roof which can hold up to ten lengths of copper tube.
Among the other goodies on the options list is the R-Link Evolution multimedia system with satellite navigation that allows destinations to be entered verbally. It can read emails out loud too. On top of that there’s a Renault R & Go app for smartphone or tablet which enables it to function automatically with the van’s radio, displaying four icons on its screen which among other things provide a Copilot Premium sat nav service. What’s more, Trafic can be equipped with keyless opening and starting.
Additional to a van and six-seater crew van the new Trafic is also produced as a nine-seater combi (minibus) and in platform cab guise ready for conversion. The latter will appear on this side of the Channel in 2015. 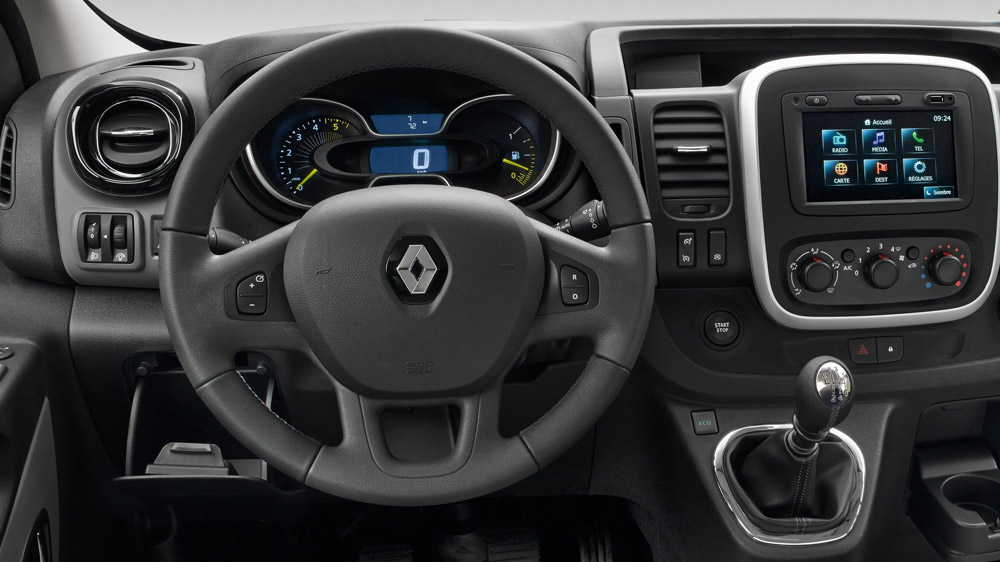 Behind the Wheel
On the European Press Launch, we sampled a short-wheelbase 2.9-tonne 140hp Trafic van with 450kg in the back and the fact that the engine was more than on top of the job came as no surprise. It went about its business quietly too; in-cab noise was kept to a minimum with the engine barely audible.
Trafic rode and handled well, with a gearchange that was a lot slicker than anything we can recall experiencing in its predecessors.
The driver’s right knee kept bumping up against the section of dashboard that bulges out to accommodate the gearlever and build quality needs tightening up in places. For example, the lid on the compartment on top of the fascia in front of the passenger didn’t fit properly, although it was pointed out to us that the demonstrator was a pre-production model.
All minor stuff, however, which didn’t really detract from a newcomer that impressed us more and more as we clocked-up the miles.
While the redesigned cab interior doesn’t have quite the positive initial impact that Transit Custom’s does, and we’re not especially keen on Trafic’s digital speedometer, it has its plus-points. Among them is that passenger visor blind spot mirror which, though initially difficult to get used to, works well in city centres and might just save the lives of a few idiots on bicycles sneaking past on the nearside when they shouldn’t be. The slightly distorted image it gives can make drivers feel a little queasy, however, and few passengers will want to stare into it for miles on end.
We also took the opportunity to sample a 115hp short-wheelbase variant. A little bit noisier than its more powerful stablemate and clearly not offering the same level of performance, it is nonetheless a perfectly competent package, especially for anybody who happens to be on short-haul urban/suburban work.
Trafic basic prices start at £18,245 (excl VAT) and it’s protected by Renault’s standard four-year/100,000-mile LCV warranty.
Click here for a PDF of the full technical specifications of the new Trafic range.
Verdict
Bar the odd minor criticism Trafic is a well thought-out package, no question about it, and is unlikely to disappoint. It will always, however, be slightly in the shade of Ford’s all-conquering, and frankly superb, Transit Custom; and we cannot help but wonder how durable the 1.6-litre diesels will turn out to be if a Trafic is worked hard, heavily-laden over an extended period.