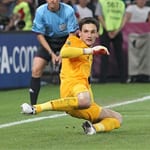 The big story dominating Gameweek 8 was that of Southampton putting eight past a (by all accounts) hapless Sunderland – or Refund-erland as they were renamed by some after Mannone called on his team-mates to reimburse the travelling away fans.
Anyone lucky enough to have taken a punt of young Dusan Tadic would have been very smug come Saturday night. And after Aguero’s one-man demolition of Spurs, he too would have made some managers very happy.
Now onto Week 9…
GK – Hugo Lloris: £5.6M
The fact that he’s currently the top points-scoring goalie in the game might make you think we haven’t spent hours researching this week’s report, but the truth is that even when his team got beaten 4-1, Hugo picked up 8 points. And that’s no mean feat.
He’s currently averaging just shy of 5 points a game, which is pretty good for a keeper, and with Newcastle visiting WHL, it’s likely he’ll improve that.
DEF – Ryan Bertrand: £5.4M
In truth, Bertrand might not have fulfilled his seemingly-inescapable destiny of becoming Ashley Cole’s replacement at Chelsea, but after a few loan spells, a couple of England caps and Team GB appearances at the Olympics, it seems that Southampton and Ronald Koeman are getting the best out of him this season.
After scoring the first premiership goal of his career and getting only his second Prem assist in the first eight games, he’s only four points shy of his record haul in fantasy Football terms.
MID – Charlie Adam: £5.7M
Now there was a time – 2010/2011 season to be exact (12 goals / 9 assists) – when no self-respecting Fantasy Football manager would be seen dead without Charlie Adam in his midfield. Then he got his big-money move to Liverpool and his star waned somewhat.
Still capable of chipping in with goals (8 last season), there is evidence to suggest that he might be getting back to his best after the last two weeks: two full games completed, 18 points scored.
FWD – Frazier Campbell: £5.2M
Now the obvious choice is Sergio Aguero, but at over £12M he might out of the price range of most managers. So over to a striker that everyone can afford – step forward, Frazier Campbell.
Yet to really make his mark in the Premiership, last season was his most successful so far in seven attempts (108 pts), but it looks like he might have finally found his feet at Crystal Palace after three goals in his last four games puts him already halfway to his 2013/14 tally.