Should noisy road works come with warning signs and diversions? 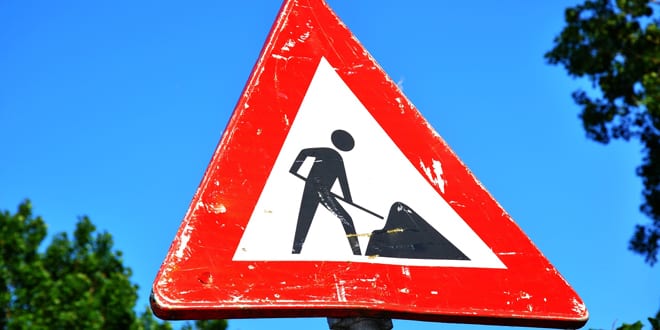 It’s time that noisy building sites and road works came with warning signs to protect the hearing of passers-by as well as those working on site.
That’s the opinion of a nationwide hearing aid specialist which says that many sites operate with noises well over what is considered safe for people’s long-term hearing, and should take visible steps to protect the public.
According to Yorkshire-based Audiologist.co.uk, it’s good that site workers are issued with ear defenders, but the public, going about their business nearby, goes unprotected.
“The average site with a pneumatic drill or heavy machinery can be far louder than acceptable limits,” says Audiologist.co.uk spokesperson Jonathan Ratcliffe, “And often people can be walking mere feet away without any protection.
“And that’s particularly worrying for vulnerable people in society, such as the very young, the elderly, or people with already compromised hearing.”
The major problem is that a building site jack hammer or road worker’s pneumatic drill can be as loud as 90dB (decibels), where experts agree that exposure to noises above 85dB can be damaging to hearing.
But what’s a mere 5dB difference among friends? Quite a lot says, Audiologist.co.uk’s Jonathan Ratcliffe.
“The decibel scale is logarithmic, not linear – just like the Richter Scale for earthquakes. That means 90dB isn’t five per cent louder than 85, it’s around one-and-a-half times as loud.

That sort of level might be OK for the public if it were confined to behind the solid fencing of a building site, Audiologist.co.uk says. But in a town or city street that becomes a real problem for those with sensitive hearing.
So, what should be done?
“In an ideal world,” says Ratcliffe, “Site staff should be handing out ear defenders to passers-by. But this isn’t an ideal world, and this is never going to happen.”
“And we know what the public is like – the poor construction company will go through hundreds of sets of stolen ear defenders in a single day. People love a freebie.”
Instead, Ratcliffe suggests mandatory warning signs that the public are entering an area where they could be exposed to potentially dangerous sound levels.
“And on top of that, there should be suggested diversion routes to help people find their way past,” he says.
It’s not a sledgehammer to crack a nut, Audiologist argues. There’s a genuine risk that vulnerable people could suffer hearing injuries as a result of exposure to loud industrial noise, and there should be a duty of care on the construction industry to mitigate that risk.
“In the end, it makes perfect sense for the general public to be warned of loud machinery in public places,” says Audiologist.co.uk’s Jonathan Ratcliffe.
“That leaves people to take their own judgement as to whether they should walk on past with fingers in their ears, or to take a diversion.”
It’s either that or hang on to the day they invest the silent pneumatic drill.
“That’s not going to happen, either.”