Posted on August 9, 2013 by Installer Online 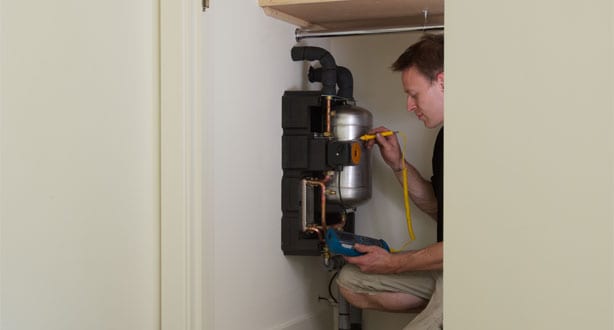 Placing collector panels on the roof of timber frame housing involves early installation and a carefully planned schedule. But, for installer Ryan Faint, choosing Alpha’s SolarSmart system dramatically cut down installation time and helped him meet the strict requirements of the project.
The project of two, three-storey townhouses in Wadhurst, East Sussex, had a high domestic hot water demand with a kitchen, cloakroom, bathroom and en-suite in each property. To meet the requirements Ryan chose to install Alpha InTec 34C boilers with a SolarSmart 100 solar thermal system.
Fast installation
Using the SolarSmart system on a timber frame building meant that the collector panels had to be installed at a very early stage of the build and then tiled in. Aware that slow installation of the panels could have a knock on effect on the rest of the build, Ryan hired a 7.5m wind up crane to hoist the panels into position, but was soon pleasantly surprised by how quickly the panels went on. “The whole installation took just a few hours – after a bit of practice with the first, we fitted the second panel in just an hour and half. I was really impressed with how fast and easy they were to fit.”
The initial pipework was also completed at this stage meaning all the groundwork was complete and ready for installation of the boiler at a later stage in the build.
Integrated system solution
Chosen for its ability to meet SAP requirements on the project, the InTec 34C was Ryan’s first Alpha installation: “The principle of the Alpha system is brilliant, there’s no other system around which lets you run solar thermal with a combination boiler the way theirs does. The drainback unit sits in a cupboard below the eves with the 100l cylinder placed directly below that. The boiler is situated on the ground floor and will have a programmable thermostat control which allows the end user to control everything from this rather than go to the boiler each time.”
Furthermore, by using the InTec plus SolarSmart 100 Ryan was able meet the SAP requirements of the build. Incorporating renewable capability to lower emissions and save the occupier money on their fuel bills.
From box to wall
Despite never having fitted an Alpha before, Ryan installed the boiler, drainback unit and cyclinder in a day. “The installation went exactly as planned, you don’t even have to open the case to get the boiler up. It comes straight out of the box and on the wall. I’d pre-line the flue so all I had to do was connect it to the boiler.”
Due to the low position of the boilers – in a cupboard under the stairs – Ryan had to fit a terminal guard on the exterior of the building, but even the slighter tricky siting of the boiler didn’t impact on how easy it was to install.
It might have been his first installation of an Alpha but the overall experience means it’s unlikely to be his last. “From an installation perspective it’s been a really smooth experience, Alpha couldn’t have made it simpler for installers in terms of the connections and installation process. Even the panels were a surprise, as I thought these may prove quite tricky to fit on the roof. I’ve been really impressed by the whole process as well as the help and service of everyone at Alpha.”
For more information on Alpha visit www.alpha-innovation.co.uk. 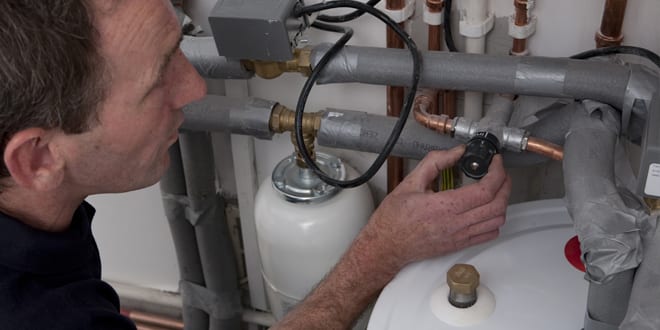 How to select the most appropriate heating system for the job 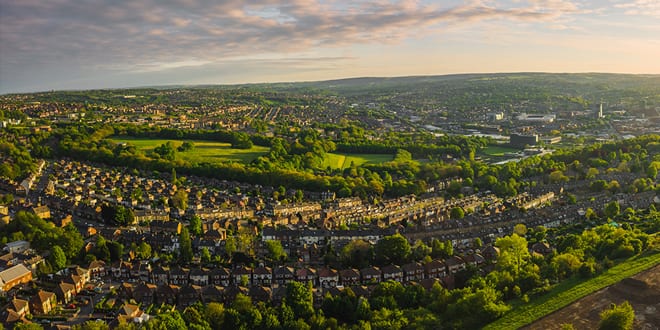