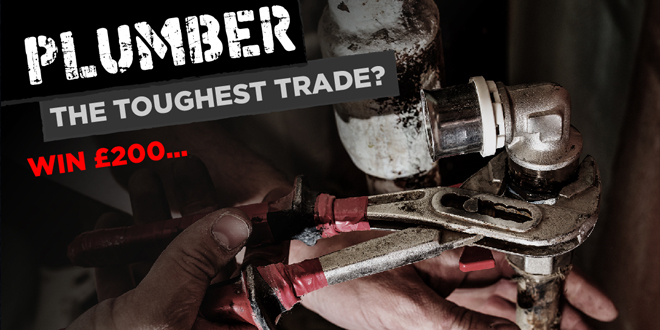 Posted by: jsharpe on January 23, 2019 in Competitions, Industry News Leave a comment

Swarfega is back on the hunt for the toughest trade out there.

Across January and February Swarfega is challenging installers to post a picture of themselves or a colleague battling their toughest task on their Facebook or Twitter page with the hashtag #ToughestTrade and a short reason why their trade should win 2019’s accolade.

At the end of January, using their Tough-O-Meter, Swarfega will judge each picture and choose the one showing the toughest task. The winner chosen will receive £200 in Amazon vouchers and the trade that the winner represents will be crowned Swarfega’s New Toughest Trade for 2019.

After a hard-fought battle, the 2018 title was handed to Russell Ennis, representing plasterers with his mammoth task of plastering a huge vaulted ceiling. In 2019 Swarfega will be on the hunt again, to find out if plasterers can defend their title or if they’ll be defeated by a competing trade.

There’s no doubt about it, people working in the trades take on some of the toughest tasks around, as we saw at the start of this year. From Charlie Nash representing plumbers with his contortionist skills, to Graeme Lang, an offshore scaffolder, Swarfega want to know who can beat 2018’s entries.

There’s nothing more draining than repairing leaking pipes, especially when dealing with the soil pipe or those buried, hidden in walls or disappearing into concrete slabs. Make sure you shout about your trade and send in a picture to Swarfega showing why heating and plumbing is as tough as it gets, and let’s beat 2018’s 5th place.

The first 10 people to post their toughest task picture will receive a pack of TOUGH by Swarfega Gift Packs so get moving quick and post your images on the social media channels below:

For more details on the competition, visit www.toughbs.com

Why mental health and wellbeing should be taken seriously by tradespeople