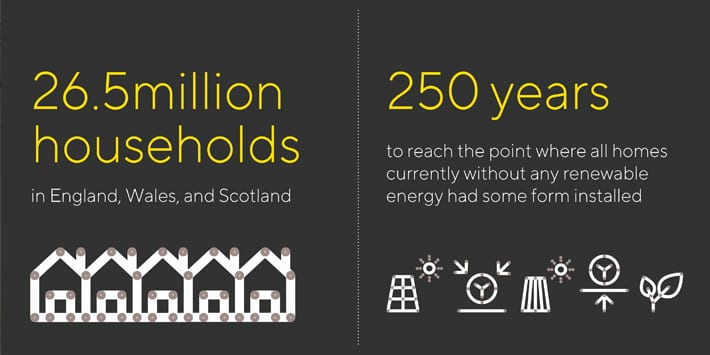 A new report from MCS has revealed huge disparities in Britain’s uptake of small-scale renewables over the past 14 years.

Renewing Britain: The Changing Landscape of Home-Grown Energy 2008 – 2021 – uncovers 14 years’ worth of data held by the MCS Installer Database (MID), against a backdrop of a UK target to reach net-zero by 2050.

Since 2008, MCS has registered 1.2 million installations of the five major renewable energy technologies, generating 34,000GWh-plus of energy, and saving nearly 10 million tonnes of CO₂e – equivalent to the electricity consumed annually by 9.65 million homes.

The data shows the pace of installing small-scale renewables is achingly slow in the context of the 2050 target: 1.2 million installations over 14 years suggests a rate of just 100,000 per annum, even in a period when solar PV boomed.

MCS has calculated that, with almost 26.5 million households in England, Wales, and Scotland, it would take around 250 years to reach the point where all homes had some form of renewable energy installed.

The analysis also shows that the path of growth has been volatile, with the number of installations spiking and dropping in line with changes in government incentives, notably the Feed in Tariff (FiT) and Renewable Heat Incentive (RHI). 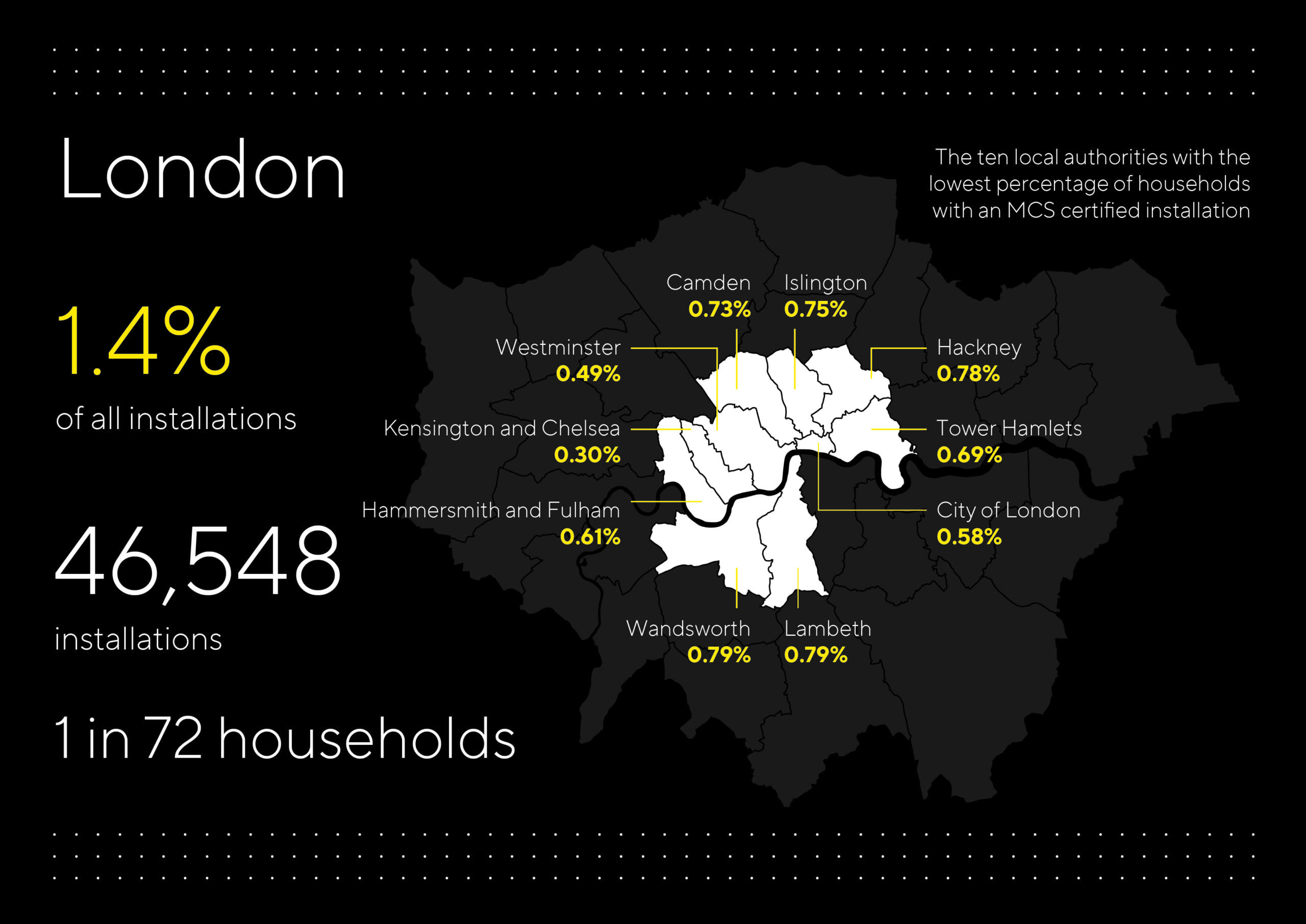 Deserts and forests: renewables in Britain to date

By mapping its own data against official statistics, MCS has identified commonalities in areas where small-scale renewables are particularly prevalent or scarce – creating ‘forests’ or ‘deserts’ of renewable technologies.

When analysing the data, MCS looked at the rate of installation as a percentage of households. It also considered the rural or urban nature of each local authority, to what extent they are on or off the gas grid, average gross disposable income, and levels of fuel poverty.

Predictably, adoption of renewable heat is strongly correlated to areas where a relatively large proportion of consumers have no access to mains gas or where fuel poverty is prevalent.

The Orkney Islands and the Western Isles are the top two areas in Britain for renewables deployment. In Orkney, one in five properties has some form of small-scale renewables. It has the highest number of Ground/Water-Source Heat Pumps (G/WSHPs) and Solar Thermal installations (as a percentage of homes), while ranking second for Air-Source Heat Pumps (ASHPs), and seventh for Biomass.

By 2016, Orkney was generating 120.5% of its electrical needs from renewable sources, driven by local and national initiatives. The area introduced a Fuel Poverty Strategy in 2017, aiming to reduce it by 2022 and eradicate it by 2032, which has driven the uptake in renewables.

The Western Isles has the highest level of fuel poverty in Britain (36%) and the highest proportion of homes with air-source heat pumps. In fact, the five local authorities in the whole of the UK with the highest rate of ASHP installations are all in Scotland, with all having high rates of fuel poverty.

Overall, rural or semi-rural areas have predominately led the way on small-scale installations, accounting for 18 of the top 20 local authorities.

Cornwall is a leader for solar energy, with almost 20,000 Solar PV installations to date. The county generates 37% of its electricity from renewables; almost double that of Wiltshire, which has the second highest rate of Solar PV in Britain.

Several local initiatives to encourage installations have also been introduced in Cornwall, such as the Green Cornwall Programme and its 2019 Climate Change plan. They support major change in the retrofitting of houses, both social and private-rented, as well as the installation of solar panels on council-owned homes.

At the other end of the scale are the urban deserts of London. The 10 local authorities with the lowest rates of installations for small-scale renewables are all boroughs of the capital, equating to fewer than one in every 127 households.

The picture presented is clearly evidenced by the data; however, there are several urban and semi-urban areas that buck the trend. Stirling and Peterborough have the highest levels of Solar PV installations, while urban Enfield in London has the eleventh highest percentage of G/WSHPs.

Sunderland – where fewer than one in every 100 homes is designated rural – has one of the lowest average disposable incomes, yet one of the highest rates of Solar PV installations (7.6%). Sunderland City Council has an ongoing programme of installing Solar PV with Gentoo, the city’s biggest social housing provider. By late 2016, the city had 690 domestic Solar PV installations per 10,000 households compared with the UK average of 279.

Deserts and forests aside, the wider picture uncovers where areas of Britain are falling short when it comes to small-scale renewables. Many local authorities have an installation rate of fewer than 5% of households, including most of Lancashire, West Yorkshire, the West Midlands, and South Wales. 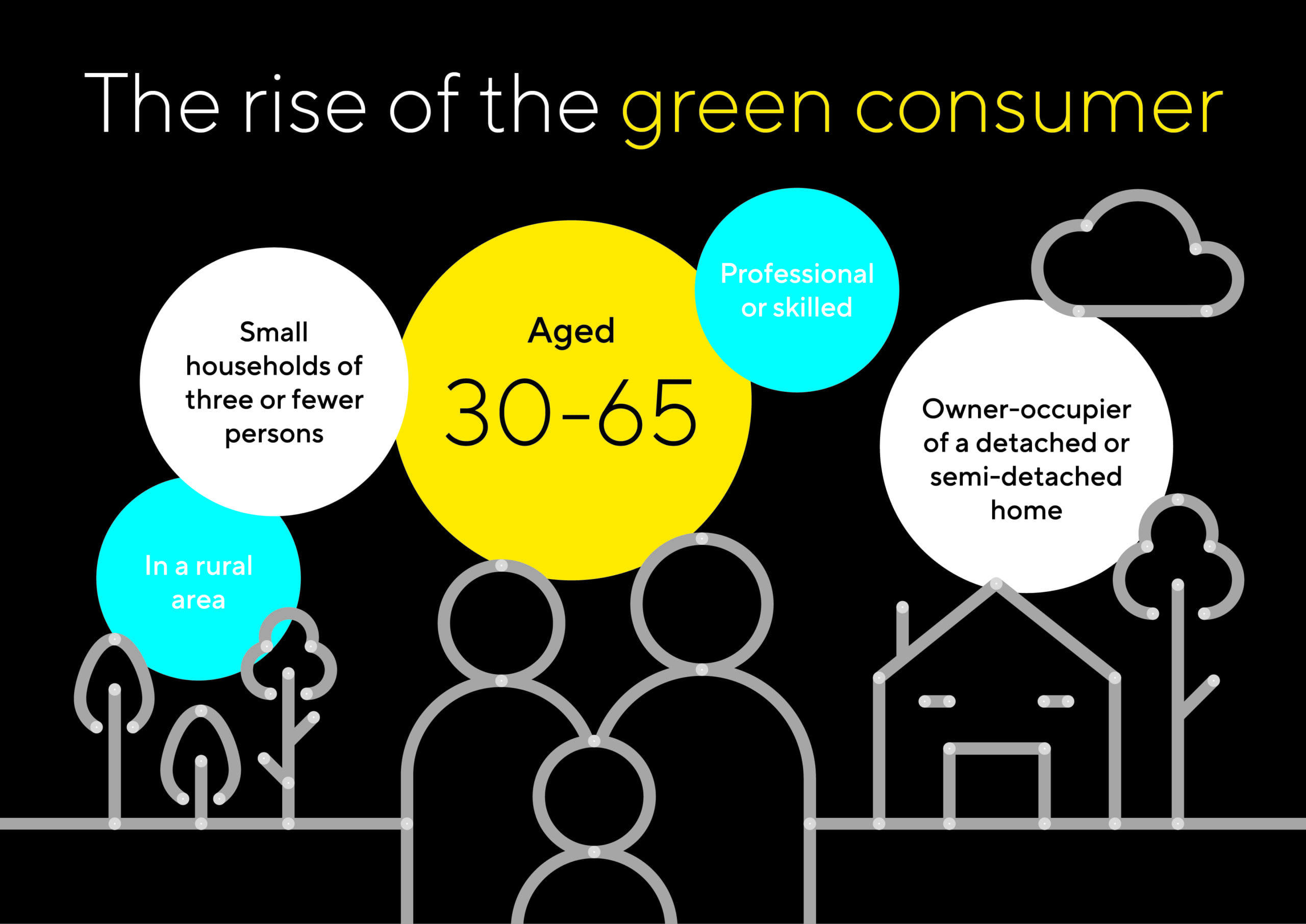 The report also used more than a decade’s worth of data to profile the typical green consumer i.e. individuals that are most likely to adopt microgeneration renewable technologies.

MCS concluded that the standard consumer is an owner-occupier living in a small household in a rural area, aged 30 to 65, with a professional, skilled trade or senior job.

Over 75% of all homes with MCS certified installations were detached or semi-detached houses, with eight in 10 households having three or fewer occupants. More than 40% of homes sold with existing renewables installed were detached.

MCS is at the heart of three new government incentive schemes, including the Green Homes Grant, a Smart Export Guarantee in place of the FiT, and consideration of a Clean Heat Grant to replace the RHI from 2022.

Renewing Britain intends to help government and industry to learn from thriving markets (forests) and identify barriers in areas where renewables have made little or no penetration (deserts).

In the report, MCS makes three key recommendations to the government:

Areas with the lowest home-grown energy

Ian Rippin, Chief Executive Officer of MCS, commented: “Domestic renewables have come a long way since 2008, when just 43 installations were made. The wealth of data at our disposal that we’ve distilled into this report paints an invaluable picture of the past to help inform our current path to net-zero.

“The data speaks for itself: Britain is a divided country when it comes to the investment in small-scale renewables, with myriad factors affecting uptake. True change is happening at a local authority level; something which central government should learn from.

“Short, sharp injections of support in the form of consumer incentives have been shown to drive temporary demand. Our core recommendations are centred on the fact we need a carefully considered, long-term roadmap for the quick, broad adoption of renewables and the decarbonisation of our homes.

“MCS and the wider the industry are here to continue supporting the government as we move into a crucial period in addressing the climate emergency.”

MCS is overseen by the MCS Charitable Foundation, which works to increase public confidence, awareness and access to renewable energy and low carbon solutions across the UK.

Adrian Ramsay, chief executive officer of the MCS Charitable Foundation, commented: “This report will be a really valuable tool to policymakers, researchers and the renewables sector in understanding the trends and patterns of the last 14 years and setting agendas to deliver the transformational change the industry needs to create a resilient and greener future.” 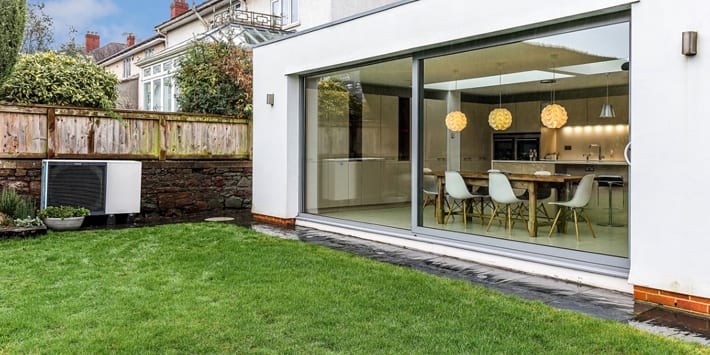 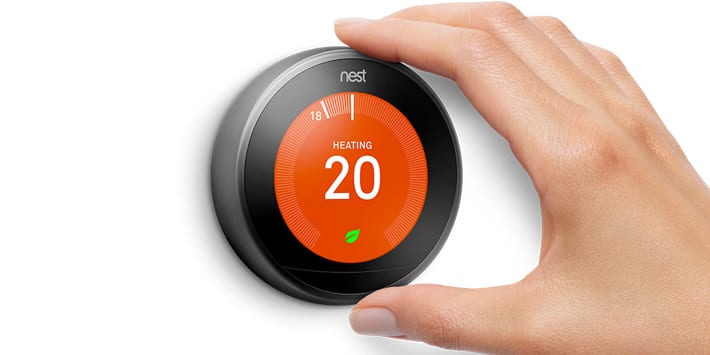