Posted on November 7, 2013 by Installer Online 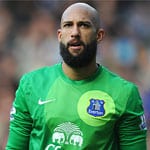 While Sturridge and Suarez have been gaining plaudits left, right and centre for their ability to bang in the goals, Sergio Aguero has been quietly keeping his hand in. After a hat-trick in the demolition of Norwich this weekend, he found himself back at the top of the goal-scoring charts. Elsewhere, Asmir Begovic took himself to the top of
Stoke’s goalscoring chart.
For most of the top half of the table, it wasn’t a great week – with the exception of Arsenal who not only beat Liverpool but kept the in-form ‘SAS’ strike force very, very quiet.
Steady performer
Gareth McAuley
Always good for the odd goal throughout the season and his fair share of clean sheets, Gareth McAuley always represents good value for a defender. This week saw him grab 15 points after scoring, keeping a clean sheet and grabbing three bonus points. Now, I’m not saying he’s Leighton Baines, but with two goals already, he seems a dead cert for at least 100 points for the third year running.
The rock
Tim Howard
In the last eight seasons, Tim Howard has only missed two games in total, making him an invaluable member of the Everton set-up. Ten games in and he’s amassed 53 points (helped by an impressive two penalty saves already), putting him well on track to exceed his average haul of 142 points. Everton’s opponents this weekend are Crystal Palace – maybe another clean sheet coming up?
The risk
Costel Pantilimon
Ok – so Joe Hart is, according to Hodgson, still the England No 1, but it appears to be less set in stone at club level where Costel Pantilimon has started the last three games (including the clean sheet against Norwich last week). The question, of course, is whether Pellegrini decides to stick with the hulking Romanian. If so, £4.9 million is a snip for a City keeper.
The silent partner
Jay Rodriguez
In recent months, any talk of picking Southampton players for a fantasy football team will have been focused on the back four. In the last two weeks, however, Jay Rodriguez has wrestled the limelight away from Lovren and the boys by scoring three goals in the last four games (28 points in the same period). A recent call-up to the England squad is surely only going to boost his confidence.
Under the radar
Guy Demel
In truth, the stand-out performer in the increasingly stingy West ham defence is Winston Reid, but an injury means that he’s likely to miss the next couple of games. Step forward then Guy Demel as the next biggest point scorer in the Hammers’ back four. He has six clean sheets already this season and, with Norwich next up, the smart money might be on a seventh very soon.
PICK YOUR TEAM NOW, CLICK HERE!