Posted on November 22, 2013 by Installer Online 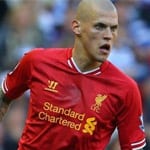 After the international break, the Premiership returns with some real humdingers as Liverpool take on Everton, Man City are visited by Spurs and third-placed Southampton travel to Arsenal trying to cement their Top Four credentials.
Last time out, Luis Suarez once again dominated the scoring charts, bagging another brace against Fulham, in a week where the games were either feast or famine – seven teams kept clean sheets yet five games features four or more goals.
Zero to hero
David Bardsley
After a summer in which it seemed like Bardsley might never pull on the red and white of Sunderland again, two goals in a week under a new manager (albeit one in the League Cup) has elevated him to the status of hero. A clean sheet, 3 bonus points and the aforementioned goal gave him 15 points for the week. That takes him to 16 points for the season.
Keeping quiet
Rickie Lambert
A lot of the recent hype around Southampton has been about Adam Lallana and Jay Rodrgiuez, meaning that last year’s stra man appears to have taken a backseat. However, a bumper week of two assists and a goal (15 points) took his season tally to 55 points, making him one of the top performing strikers in the Prem.
Back in form
Martin Skrtel
Despite reaching the heady heights of second, Liverpool have only kept four clean sheets so far this season, meaning that their defenders are not massively in demand. A goal and a clean sheet last time out though has boosted Skrtel’s tally to 31. Based on previous seasons, he’s probably good for another couple of goals and at least 100 points.
Captain Marvel
Phil Jagielka
Three clean sheets in a row have not only kept Everton in the running at the top of the table, but they have also seen their defenders charge up the points chart in FF – none more so than Phil Jagielka. Dominant performances the last two times out (against Spurs and Palace) have seen Jags grab 18 points due to a maximum of 6 bonus points.
The Payback kid
Wilfried Bony
After a big money arrival in the summer following a frankly blistering goal to game ratio in the Dutch league last year, hopes were high in South Wales for Mr Bony. A goal on Prem debut against Man Utd boosted expectations further, but since then he’s struggled to hold down a regular place. A start last week brought two goals (and 13 points) and the hope of bigger things to come.