Posted on December 13, 2013 by Installer Online 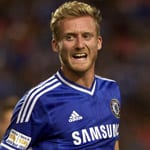 It’s certainly getting tight at the top after a Game Week in which many of the top eight played against each other – as might be expected many of these ‘top of the table’ clashes ended in draws. The biggest surprise though came as Chelsea threw a lead to lose at struggling Stoke and missed a golden opportunity to close the gap on Arsenal.
Finding his feet
Leroy Fer
His arrival at Carrow Road in the summer was largely overshadowed by Ricky van Wolfswinkel, but it is Fer who has seemingly found his feet (and the back of the net) more quickly. With three goals in the last five matches, Fer is undoubtedly offering good value at just £5.9million – especially if he has any more weeks like this last one where he snaffled an impressive 15 points.
Player of the month
Tim Krul
It’s not often that a goalkeeper is awarded the Player of the Month in the Prem, but Tim Krul’s inspired performances in November more than justified his selection – and he appears to have continued that form into December with yet another clean sheet and a ten-point haul against ManUnited. With Southampton, Palace and Stoke up next, he might be in line to retain his award.
Back with a bang
Sascha Riether
In a week where none of the top defenders kept clean sheets, it was the turn of some of the more inconsistent defences to shine. Riether is recently back from a lengthy suspension after kicking out at United’s Januzaj, but his performance on Saturday ensured Fulham kept a clean sheet and earned him a couple of bonus points too.
Goal machine
Andre Schurrle
Before the season began, we earmarked Schurrle as one of the potential stars of the 2014 season. It’s fair to say, though, that the German star has struggled to win a place in the Chelsea line up. After managing just 30 mins in the previous five games, young Andre took the opportunity of a starting berth with both hands as he netted a brace and – with that – 15 points.
Super sub
Gerard Deulofeu
The very fact that Barcelona have only loaned Deulofeu suggests that they have high hopes for him, and two eye-catching performances in the last three games (including this week’s where he was only on the pitch for 12minutes) seem to justifying that faith. Two goals and an assist (17pts) in recent games have seen his points tally rocket by more than double to 25. More to come?