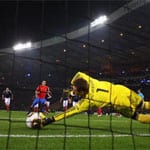 Mourinho’s machinations at Chelsea are still causing selection headaches for managers as there was still no clear indication against Man United of who he sees as his preferred striker – Rooney excepted. Elsewhere, Liverpool and Spurs continue to keep clean sheets, leading to a stampede to sign up their defenders/goalkeepers.
This week sees Villa and Chelsea without a game as Chelsea battle it out for the Super Cup on Friday night. Another opportunity for Jose to tinker with his number 9 slot…
Biggest shock
Allan McGregor
It might be a hangover from the eighties when Scottish goalies were the butt of every joke or the fact that no one held out much hope for Hull, but very few plumped for Mr McGregor as their shotstopper of choice. However, two weeks in and 16 points amassed might see that change. Man City on Saturday…
Surprise package
Frazier Campbell
Young Frazier has had a chequered career in the Prem (Cardiff is his fourth club already) and Saturday’s game saw him net only his 7th and 8th Premiership goals, meaning very few people have selected him for their team (just 3%). At £5.5 million, he could provide the perfect Glenn Murray replacement for anyone needing a cheap striker.
The one that got away
Charlie Adam
In his debut Premiership season with Blackpool, Adam earned a whopping 192 points, and a high profile transfer to Liverpool, which didn’t work out (only 101pts that season). A relatively quiet season at Stoke last year has led to him being shunned by FF players, but a 7 point haul this weekend might result in him featuring in more than the current 0.6% of teams.
Mr Consistent
Olivier Giroud
Week 1 – 8pts; Week 2 – 8pts. Olivier Giroud seems to have found his feet at Arsenal after a debut season that seemed to be largely underwhelming despite 11 Prem goals and a handful of assists. Now firmly established as the Gunners’ main goal threat, he has started very strongly but the North London derby should be a big test – can he score 8pts for the third week running?
Hit the ground running

Marouane Chamakh
First start, first goal – could Chamakh be the signing off the season for early strugglers Palace? Saturday’s goal was his first in the Premiership since September 2011but his early days at Arsenal hinted at a man who knew where the goal was. He’s definitely cheap at £5 million and if he takes penalties, he could be good for a few goals.
The sure thing
Branislav Ivanovic
He’s one of the most expensive defenders in the game and he’s averaged nearly 120points every full season he’s been in the Premiership so it’s no real surprise that Ivanovic is setting the early pace with 21 points from his first three games – including two clean sheets and a goal. No game for him this week so maybe hold off before picking him.