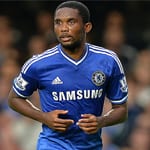 Apparently, it’s not ‘the done thing’ to kick someone when they’re down. Try telling that to Mourinho and his gang, who shamelessly booted an already-prone Manchester United with gusto during a 3-1 win.
Elsewhere, Man City continued their phenomenal goal-scoring record with another four against a struggling Cardiff side. Not a happy return to Manchester for Ole (although will he fare better at Old Trafford in GW 23?).
Hitman returns
Samuel Eto’o
It’s fair to say that for people who have longed to see the great Samuel Eto’o in the premier League, his debut season has been a bit of a let-down. That is until he decided to double his season’s tally in 90 minutes against Man United with a hat-trick, giving him four goals in his last two appearances. Chelsea have arguably been missing a regular source of goals from a striker, so maybe now is Eto’o’s time.
French resistance
Yohan Cabaye
Barely an hour goes by at the moment without Newcastle’s French talisman being linked to a big money move away from Geordie-land. In the meantime, though, he continues to keep Newcastle’s challenge on track. A brace against West Ham last time out, took his tally to seven for the season (already more than he scored last season) and his ability to create goals also makes a handy addition in the midfield.
Wing wonder
Adam Johnson
Seemingly forgotten at man City – and more recently at Sunderland – the arrival of Gus Poyet on Wearside appears to have given the former England wide man a new lease of life. Thirty-five points in the last two weeks (four goals and two assists) have nearly doubled his season’s tally so far – and put him on course for his best year yet in fantasy league terms. Does an England recall beckon?
Renaissance man
Jason Puncheon
What a weird three games it’s been for Jason Puncheon at Palace. In between two crucial goal-scoring performances against Norwich and Stoke, he took that fateful penalty against Spurs, which led to a lot of vitriol and castigation (not all of it that Mr Puncheon responded to favourably). Importantly, those two recent goals are his first of the season, and as Palace look to someone to step up and save their Prem status, could he be the man?
Back in the game
Santi Cazorla
After an impressive debut season in 2012/13 that included twelve goals and thirteen assists (205 points in total), Santi Cazorla was the first name on the team sheet of many fantasy league managers. However, an injury-hit start of the season saw him dropped by more than 300,000 players by the beginning of October. He’s just completed five games in a row for the first time in 2013/14, culminating in last week’s two-goal, match-winning performance against Fulham.