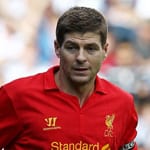 As the January transfer window comes to a close, the major changes that have had managers scrambling so far is Juan Mata’s move to Manchester United (189,099 brought him in the last week) and Yohan Cabaye heading off to PSG – arguably leaving Newcastle’s Champs League bid in tatters.
Elsewhere, Liverpool’s huge derby win and Man City’s humbling of Spurs sent very real signs of intent to the rest of the league.
Edin Dzeko
A lot of fuss has been made about the recent injury to Aguero, but Edin Dzeko snuck under the radar to keep City’s title campaign on track. Four goals in the last five have seen him net 39 points (more than half his season’s tally) and, with Aguero set for more time on the sidelines, the blue side of Manchester is going to be praying he keeps his scoring boots.
Stevie Gerrard
The start of this season saw the Fantasy Premier League value Stevie G at his lowest ever price – a mere £9million. This was a surprise considering 2012/13 saw him gain 185 points (10 goals, 12 assists) and his form so far suggests that he could be one of the bargains of the seasons. A masterclass against Everton took him past 100 points yet he only costs £8.8 million.
Adrian
Jussi Jaaskelainen’s early season form seemed to suggest that he was hands-down the West Ham number 1, yet Adrian has recently wrestled the jersey off him to keep two clean sheets in the last three games (25 points). For a team that has (in total) prevented the opposition from scoring in ten of its 23 games, Adrian could be a very safe bet – especially at only £4.3 million.
Jon-Jo Shelvey
Shelvey’s move to Swansea was a real ‘sink or swim’ opportunity after a relatively quiet (and unsuccessful in fantasy football terms) time at Liverpool. Half a season in and he seems to be playing in fits and starts – four goals and four assists so far suggests that he’ll end up with a decent tally but to get the most from him, you’ll need to be able to predict those weeks when he’s going to turn up.
Joel Ward
One of the guarantees of any side that Tony Pulis manages is that they are going to be hard to break down and this is being borne out at Crystal Palace (6 clean sheets in 12 games compared to just one prior to that). This means that the competitively-priced defenders of said club are suddenly finding themselves in demand – and at £.42 million, Joel Ward seems to be the pick of the bunch with 14 points in his last two games.