Posted on September 5, 2013 by Installer Online 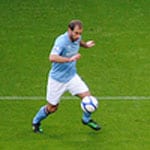 In what was surely one of the lowest scoring weeks in Premiership history (and who would have guessed that new boys Crystal palace would have been top scorers?), the defenders proved to be the star performers ably assisted by their mates between the sticks.
International break means there’s a week off but it can still be a crucial week in terms of injuries so hold off picking your team just yet. Plus, there could be some big decisions in terms of whether you take the plunge on one of new arrivals in the transfer window.
Top boy
Pablo Zabaleta
The unsung hero of Man City’s defence has been a steady performer throughout his Premier League career (averaging 90pts per season). Another clean sheet and an assist this week against Hull City ensured that he provided one of the biggest points haul of the week and cemented his position as City’s top performer.
Out of favour – part 1
Victor Moses
After Sturridge’s Chelsea to Liverpool transfer last January prompted such a terrific turnaround in terms of form (and therefore points), can Victor Moses be expected to have a similar upturn in fortunes? A consistent performer at Wigan (140pts in 2011/12), the prospect of him linking up with both Sturridge and Suarez looks promising.
Out of favour – part 2
Romelu Lukaku
As one of the stars of the 2012/13 season (159pts), many fielding Lukaku in their starting 11s this time around (an initial 354,908 managers), fully expecting him to be Chelsea’s main striker. After a patchy start (40 mins across three games), his penalty miss v Real seems to have confirmed Mourinho’s lack of faith – his loss though is surely Everton’s gain where he’s likely to be first choice.
Mr Consistent
Daniel Sturridge and Olivier Giroud
Three games, three goals for two strikers who both appear to be stepping out of the limelight of more illustrious colleagues. Sturridge has responded admirably to Suarez’s continuing absence, while Giroud seems to have established himself as The Gunners top marksman after a slow start. How much longer, though, can they continue to supply most (or in Sturridge’s case all) the goals for their respective teams?
Surprise package
Mapou Yanga-Mbiwa
After a chastening experience in the opener against Man City, Newcastle have steadied the ship to the extent of two clean sheets in a row. One of the chief reasons is Yanga-Mbiwa and – as a result – he’s had a bumper haul of points (14pts in the last two weeks).  He’s valued at £4.5mil and his next games include Villa, Hull and Everton. Tempted?
Biggest shock
Robin van Persie
After a dream start, van Persie appears to have hit a barren spell after going two games without a goal. In fairness, those two games have been against Chelsea and Liverpool but every time he draws a blank, thousands of managers start to panic and either ship him out or hold their nerve. Next up for United? Crystal Palace…