Posted on October 4, 2013 by Installer Online 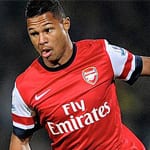 So, did you buy him? Over 170,000 managers brought in Luis Suarez and he rewarded them with a virtuoso display that brought him two goals, maximum bonus points and a whopping 13 points. Next up? Crystal Palace.
Elsewhere, Romelu Lukaku served a timely reminder to Jose Mourinho of what a goal-scoring centre forward looks like by bagging a brace (his third in two games for Everton). And what of Chelsea’s roster of strikers? Still not a goal between them…
Surprise package
Leandro Bacuna
Starting only his third Premiership game, Leandro decided to save his eye-catching performance for the visit of Manchester City. Selected by less than 1% of players, Bacuna must be one of the few players who returned a negative net transfer figure (-64) after a week in which they scored 12 points. What more does he have to do?
The old hand
John Terry
After last season when he managed only 950 minutes, John Terry started this season at a paltry £6 million – his cheapest price yet. However, the return of Jose has seen him start every Prem game for Chelsea and in GW 6, he even chipped in with a goal to take his tally so far this season to 43 – practically two thirds of the way to matching last season’s total of 66.
The young gun
Serge Gnabry
A late injury to Theo Walcott gave Serge Gnabry a spot in the Arsenal first XI against Stoke and he did enough to keep his place against Swansea in GW 6. Wenger (and a few hundred managers) were duly rewarded when he popped up with a goal and a round score of 10. Walcott is not expected back for a few weeks, by which time the Emirates could have a new hero.
The forgotten man
Gylfi Sigurdsson
When Spurs when crazy in the transfer market this summer, all the attention was on the likes of Paulinho and Christian Eriksen rather than the previous signings in midfield. Gylfi Sigurdsson has very quickly reminded everyone that he still has the talent that made him a household name in 2011/12 with Swansea. Three goals in the last three games bodes well in a Tottenham team that is motoring.
On a roll
Morgan Amalfitano
After a steady start to his Prem career against Fulham in GW 4, Morgan Amalfitano has exploded into life for West Brom, amassing 22 points in his last two games as a result of two goals, one assist and 5 (out of a possible 6) bonus points. At only £5million, it might be worth taking a chance ion his hot streak continuing – Arsenal at The Hawthorns won’t phase him after ruining Man United’s weekend at OT last time out.