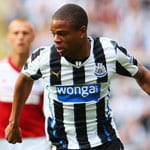 Four clean sheets in a row (five all season) and the Southampton FC defence continues to be one of the main talking points of the season. With a trip to Old Trafford coming up this weekend, it may well be five in a row against a misfiring Manchester United.
On a hot streak
Loic Remy
Six goals in a relegated QPR team last term should have served notice to all managers of Remy’s abilities but only in recent weeks has he started to make it into many teams. Five goals in the last three games (against Hull, Everton and Cardiff) have taken his points tally to forty so far this season – and at only £7.7m, he might just prove an invaluable addition.
Worth a punt
Ravel Morrison
Not many at Old Trafford doubted his ability but a need for a change of scene saw Ravel Morrison join Big Sam at Upton Park. His early season form suggested that he wasn’t about to prove doubters wrong, but a regular starting spot and two goals in the last three games ( as well as two for the U21s in midweek) suggest he has found his feet at West Ham.
Surprise package
Andros Townsend
Perhaps the biggest surprise over the international break was that Townsend was SO influential for England. Going into the game, no one doubted his ability but it has yet to manifest itself in fantasy football terms as, this season, he has only weighed in with one assist so far. Could his dynamic performances for the Three Lions be the springboard for a glut of points?
The sure thing
Yaya Toure
Ok so it doesn’t take a genius to recognise that Yaya Toure was always going to be a good signing – after all, he’s the most expensive of a very expensive City midfield and he’s racked up an average of 140 points per season since 2010/11. However, what is worth looking at is the fact that he’s already scored four goals in seven games when he normally averages six a season.
Under the radar
Willian
Unusually for a high-profile Chelsea player who cost £32m, Willian Borges da Silva has yet to attract attention of anyone at all (0.1% selections). Currently, only Josh McEachran (on-loan at Watford) has been selected by fewer managers. However, this week he managed to grab six points in only ten minutes of game time. Having lost £800,000 in value in four weeks (now just £7.7m), he might just represent a bit of a steal…