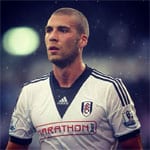 This was the week when after a combined total of 651 minutes on the pitch this season, a Chelsea striker finally scored a Premier League goal – step forward Samuel Eto’o.
Elsewhere, it was a bit of a goal-fest as half the games featured four or more goals and even Southampton conceded. Not an easy week for the keepers – although Lloris kept his fifth clean sheet of the season. Can he make it six against Hull this weekend?
Forgotten man
Adam Lallana
This time last year, Lallana’s early season from in the Premiership was enough to earn him an England call up. Twelve months (and 93 points in the 2012/13) later, the Southampton skipper appears to be one of his team’s driving forces. Two goals in his last two games have elevated him to a whopping 44 points already (33 in his last four games). He now faces Fulham, Stoke and Hull.
The missing piece
Mesut Ozil
It’s been nine long years since Arsenal won the Premiership but confidence is high since the Deadline Day arrival of Mesut Ozil. Two goals against Norwich at the weekend to add to his tally of four assists in five games (39 points) suggest that he could just provide the difference. This week, Crystal Palace are in the firing line and it doesn’t bode well.
Hitting form
Eden Hazard
One of the stand-out players of 2012/13 (190 points), Eden Hazard’s slow start to the season has seen his star wane with managers (a net transfer of -400,454 so far as well as a drop in value of £0.5 million). However, three goals and an assist in the last two weeks has seen him gain 26 points (43 points for the season). Is faith restored? Man City certainly hope not…
Young gun
Pajtim Kasami
After appearing for only 23 minutes last season, Kasami appears to have cemented his place in the starting line-up for 2013/14 and, after seven appearances, Martin Jol is beginning to see the benefits. Admittedly, his overall contribution has not been spectacular (although his goal in Monday’s game was), but two goals already means that he could represent a bit of a steal at only £4.5 million.
Under the radar
Vlad Chiriches
Despite costing somewhere in the region of £8.5 million, Vlad Chiriches appear to have been completely ignored by the vast majority of managers (so few have picked him that his ‘selected by’ figure is 0.0%). The Romanian captain, though, started his first game for Spurs with a clean sheet and if he cements his place in one of the tightest defences around, he’ll be a snip at only £5.3 million.